Finding a Line Quickly—Deciding What Pen to Use 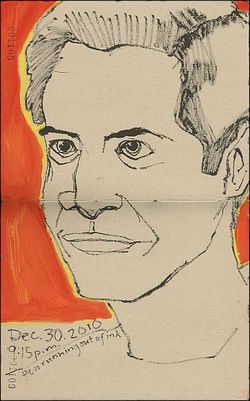 Full post is a brief discussion of selecting a pen for line quality, but also selecting lines on a face to actually draw.

Left: Pentel Pocket Brush Pen sketch of a man's face—in the same journal from Monday's post (I used Magnani Annegoni Designo, which is a tan paper, sized for wet media). The spread, turned here on its side so I could work a tall, vertical, is about 11.5 inches. Background is painted with yellow and then red gouache (Holbein).

I've gone through my word count for this week (it's a horribly busy week).

I'm trying to practice for the Portrait Party that's coming up and so I'm trying to discover how I can measure quickly across a face area, get in the ears (I love ears) and deal with the fiddly bits around the nose. (Often, because I start with the eyes I end up off the page for the ear!)

What line you omit is as important as the one you select.

Here I'm trying to do it in as few lines as possible. I'm slowing myself down to think deliberately, and constantly checking my visual measurements, but I am also forcing myself to work as fast as possible, because I won't have much time on Monday!

I'm also leaving out any shading lines, which were bugging me in other sketches I was making over the past several weeks (and which you'll see in sketches in upcoming posts).

In the process I'm also trying to decide which pen I want to go with on Monday, which means in order to make my final decision, I'm going to have to draw outside the journal on the same paper we'll actually be using. 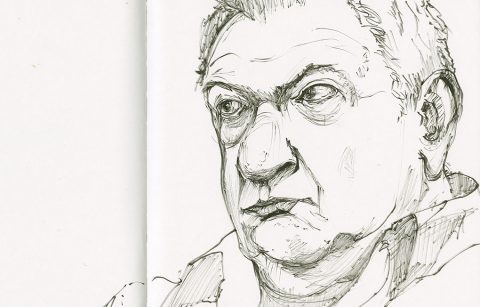 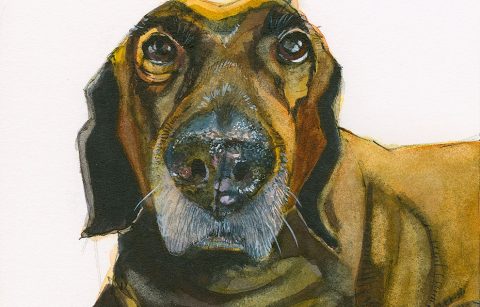