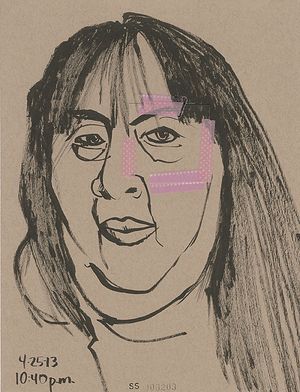 That was actually something that I started doing a little before Fake Journal Month and the conversation is based loosely (by that I mean I've left out all the cussing and other banter) on a conversation Dick and I actually had. (I share many points of connection with my fake journal character this year—though not the crucial ones people seem to focus on.)

But "Piecemeal Style" is still and live and kicking for me. I did a piece the other day that grew to 22 x 30 inches by the time I was finished. (One friend has posited that they are a cry for help in times of stress, but I actually just think they are jolly good fun, and it's clear that friend doesn't much like the end result, which is fine, because friends don't have to like everything I do, and life would be pretty darn boring if they did.)

I can't scan the 22 x 30 inch piece, but I thought you could enjoy this one I made while watching "Project Runway" in April.

This drawing is actually a sub-category of "Piecemeal Style." Normal "Piecemeal Style" involves the constant adding, with visible tape, of additional acreage of paper as the drawing grows. Today's image is more "Piecemeal Repair," which is just as fun. As in regular "Piecemeal Style" no attempt is made to hide the additions.

I'd completed this sketch but there was something off about the eye and it was too late at night to draw another sketch. Instead I taped down a piece of paper, AKA a "patch," and then redrew the eye. The top piece of tape was added after the eye was drawn because the tape repells the PPBP ink for quite awhile.

Well as my character said, and I agree, "Because it's fun."

Do something fun today. Invent a whole new style for yourself.

If you want to see more examples of "Piecemeal Style" you can check out the video flip through of my 2013 Fake Journal. You'll see examples on spreads 3, 13, 15, 18, 19, 21, 25 ("Subtle Piecemeal Style" because the tape has been pretty much painted over, but still lends such a wonderful texture in close viewing), 26, 32 (the man buried beneath the dog—she's just painted right on top of the spread, though a patch of paper was prepositioned where her eye was going to go, but it's not "Piecemeal Style"), 33, 41,42, 46, 48, 50, 51 (the dog Shirl is "Seamed Piecemeal" which is another variation—the taping is done on the non-working side of the drawing so you have the disruption of the seam or join, but not the distraction of the tape), 52 (the cleric is also "Seamed Piecemeal"; both Shirl and the cleric were created early in April while the style was still evolving, they just ended up falling late in the book), 53, 55, 56, and 57 (my favorite, because of the many jigsaw puzzle bits of paper I put together while I was sketching.) 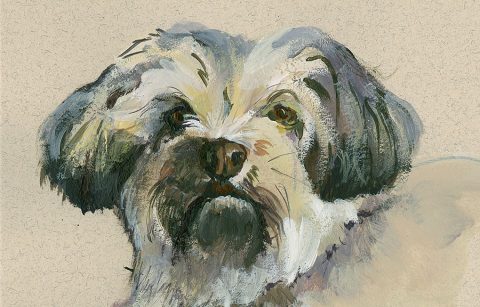 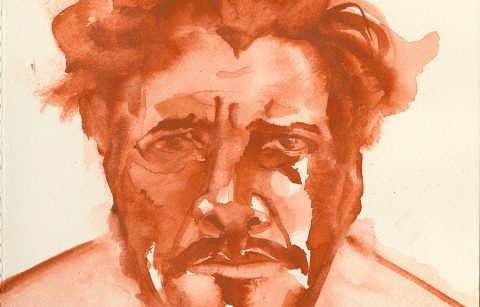