A Page Can’t Contain Your Sketches and Collage? Learn This Book Structure

Draw the Same Person Over and Over, Especially if He Makes You Laugh

Things to Do in the Current Pandemic: Get a New Eyeball

Make Some Marks, You Know You Want To…

Dry Pens Are Sometimes the Most Satisfying 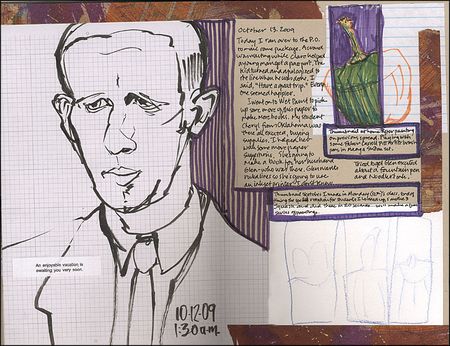 A voting reminder and another peek into the “weirdo journal.”

While this isn't a presidential election year voting still matters. Please remember to vote today. Consider why you vote. (I discussed this last year.)

Above: Page spread from the "weirdo" journal I've been discussing lately. This spread was made in stages. The sketch of the man (Pentel Pocket Brush Pen on graph paper) was placed here first. Then I added strips of decorative paper I made for covering my journals (see top and sides—purple/rust/gold strips). A fortune from dinner at a Vietnamese restaurant was added over the man's lapel. I came home on another night, late from the colored pencil class I'm teaching. I set up one of my squash and fiddled around with my Faber-Castel Pitt Artist brush pens in purple, yellow, orange, and green—making a color thumbnail of the squash and deciding on how to crop it. I decided it should get stuck in my journal along with the 3 colored pencil thumbnails I did quickly in class to show the students how I moved from one thumbnail orientation to spotting an entire series of different squash tops I wanted to do. (Sadly when I placed wax paper on top of these and burnished them a lot of the pigment lifted off so you can't see them well except in person.) Finally I did some writing about the events of the day and started to get into a doodling mode, filling the space with purple outlining and vertical lines. 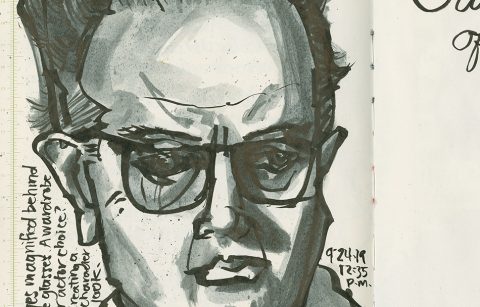 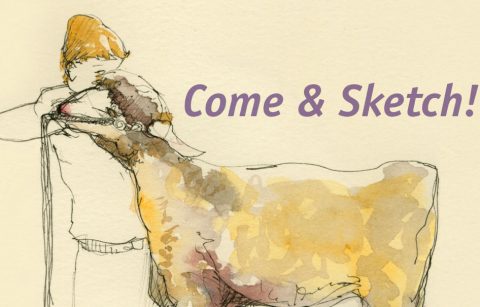