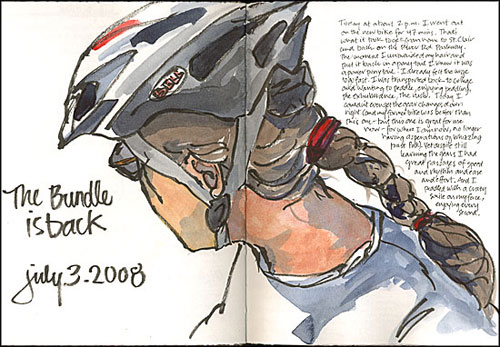 Hairdos matter. How I rediscovered the single braid when I started bicycling after a 20 year break.

This post is brought to you by the complaint of my friend Ricë who prefers it when blogs have an introductory post. We're both recovering English Majors. I fall into the opposing camp of EMs who believe in medias res is the way to begin (I even thought of calling my blog that, but it is probably taken by some user of Latin and would be awfully hard for everyone else to remember). To address Ricë's preferences, while not abandoning my own, I will endeavor to provide backstory upon occasion.

Hairdos matter. I've always known this, from the time my baby girl locks, matted by the high humidity of Manila made my first passport picture look like a childhood photo of Moe (from the Three Stuges); to the time the boys in grade school complained when I cut my hair (nothing to pull); to the time when, an ocean away and my hair growing back in length, my headmistress sternly told me my hair must always be tied back; and so on throughout my life. Visitors to www.rozwoundup.com will know what people meeting me in person know: I like braids.

But this wasn't always the case. Back when I was in graduate school, still a distance runner, the best way to cope with my hair was a power pony tail. I loved the way it flopped across my back when I ran. But when I rode my bike the hair didn't flop any more, it got sweaty and clung to my back, my cheek, my helmet, anything it could touch. The power pony tail was not an appropriate solution. Enter "the bundle." All that power pony tail hair braided into one central braid, sufficiently low to allow full range of neck motion and still not interfere with the proper positioning of the helmet. (Safety first.)

When I got dogs my biking days ended. I wanted to spend all my time with the girls and that meant walks and tracking and general types of activities that didn't involve a bike. (OK, there are attachments that you can put on your bike to handle your dog while you ride, but do you really think you can do that with two Alaskan Malamutes? Stop reading right now and go have a cracker. You have low blood sugar and aren't thinking clearly.)

Fifteen years into doglife I let go of thoughts of bike riding and gave my beautiful sparkly copper brown (sparkly like a bowling ball) bike to a friend who needed transportation. I missed her immediately, but I was philosophical. It had been awhile since I had ridden, when would I ever ride again?

Well dogs sadly don't live all that long. Finding myself dogless the idea of biking started to touch the periphery of my thoughts. I began to wonder. I began to pick up biking magazines at REI. I began to ask friends advice on what type of bike to buy (because the biking world had changed).

This summer, on July 1 I took the plunge. I got a new bike, tricked it out with all sorts of doodads. (Sadly the large squeeze horn didn't fit on the handlebars and several friends advised against the handlebar streamers).

Then I braided my hair into that long central braid, and I knew, life would never be the same again. I got on my bike and all those thoughts about using the bike to go to the grocery store just swept right out of my brain. I just wanted to go. The bike was for going. Riding the bike is like flying: in fact the other day I rode through a flock of pigeons and they rose up around me and flew beside me at my head height, heavy bodies bobbing in the air without struggle, wing tips grazing my helmet. We were all flying together, all buoyant. Sure they looked a little startled at first, but then, like the adaptable bird they are, they went with it.

Two days into my new life with my new bike I drew the self-portrait that starts this entry. I took my camera and held it up and away so I could get an angle on the bundle. I put the resultant photo up on my computer screen—so convenient when you don't want to tax your neck by holding up a mirror and twisting around. I sat back with my journal in my lap and did a quick sketch with a Pentel Pocket Brush Pen (which I love because they have durable brush tips made of individual fibers which allow you to have an expressive line quality, and because the ink is waterproof). Then I painted with light washes of gouache. (I use M.Graham and Schmincke brands of gouache. They rewet nicely if you make a pan palette out of them and they don't have opacifiers in them.) The page size is 6 x 8 inches so the full spread is 12 x 8 inches.

Biking season is winding down. The weather is much cooler in the morning. Instead of riding at 7, as I did all summer, I wait until later in the day. When the temperature hits 50 I can still ride in shorts and a t-shirt. And if I wait, there's also more light and less commuter traffic. One day I rode in the morning when it was 50 degrees and again in the afternoon when it was 80 degrees. Only in Minnesota in the fall. Mostly it's like exercising with air conditioning turned on full blast. It's wonderful.

If you haven't been on a bike for awhile, do yourself a favor and get back on. It really is like riding a bike, you don't forget how. How else can you fly, and not leave the ground? Riding a bike is the only way you'll ever experience what it's like to wear seven league boots (and I know you are dying to know what that's like). Go for it. Then come in, drink a lot of water, and journal.

Oh, and that quick release rack I got for the bike so I could carry groceries hasn't been on the bike once. Also, I've never stopped out on a ride long enough to lock the bike up so I took that expensive and heavy Kryptonite lock off the frame at 400 miles. (I'm short and have a short bicycle frame so attachments were rather cramped. I didn't do it for weight considerations, it's not that heavy.)

I did talk to Dick about the whole green aspect of my bike usage. (Or the potential at least.) Thing is, I walk most places, drive very little in a year now that I'm not taking dogs to far away places, and drive a gas efficient car. Dick, who is an engineer, did some quick math about gas prices and mileage. He said something about how I would "have to go 7,000 miles," or was it "spend $7,000 for gas" before I broke even on expenses?

Don't you just love folks who can do that kind of math in their heads? I bet he did really, really well on the math portion of his GREs (I actually did reasonably well on them myself but then I studied really hard with the help of a microbiologist who was also able to do math in his head). And I'm always asking him to figure out things for me, daily word-math-problems that don't seem comprehensible to me: ink jet usage per square inch, pretty much anything to do with fluids or volume, how many 1/2 teaspoons in a 1/2 tablespoon, to name just a few things.

But frankly I already wasn't listening and can't even recall what he said, because I was pushing my bike out the door to go flying. 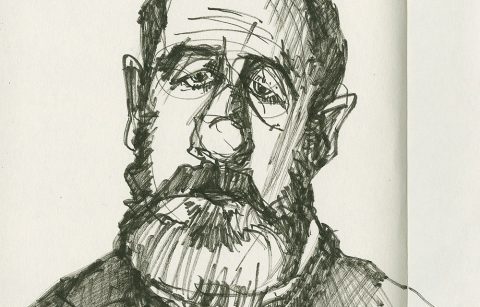 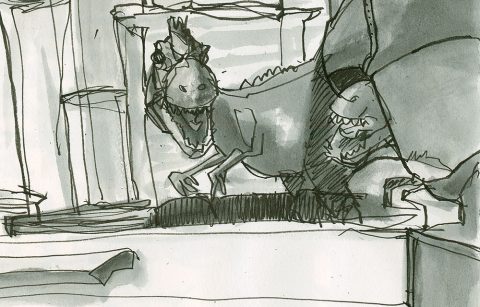 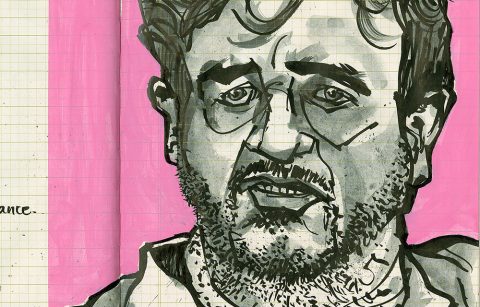