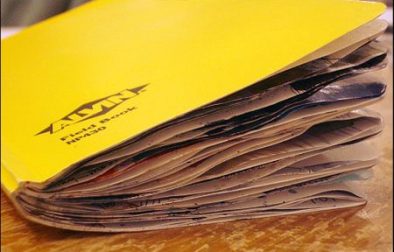 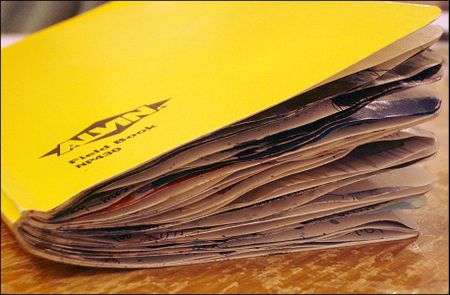 Above: my fake journal kept to celebrate International Fake Journal Month 2009, finished today, the book contains exactly 30 page spreads, one done each day in April. The journal is an Alvin Field book with water resistant pages. I worked with dip pen and Ziller Acrylic ink (glossy black) and Schmincke Pan Watercolors. Click on the image to view an enlargement.

Well, it's over. For me anyway. Other folks have about 4 more hours until the end of IFJM. If you are new to this blog and wondering what the heck IFJM is you can click on the IFJM category in the category list, click on the appropriate page in the page list, or go to the Official International Fake Journal Month Blog and read more about it; as well as see postings of the images in my 2009 fake journal and the fake journals of some other folks too.. 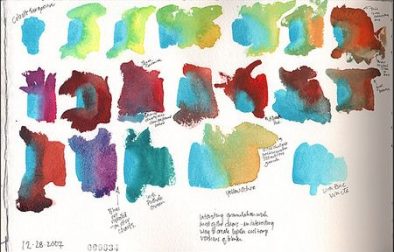 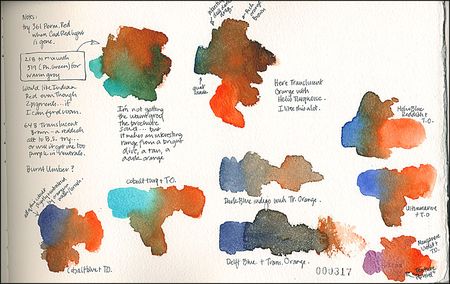 Above: Another "chart" I made when testing Schmincke pan watercolors in December 2007. I'm mixing new selections with colors already on my palette. Click on the image to view an enlargement.

I thought it might be helpful for people to see the other types of tests I put watercolors through when making a selection for my palette, so I have included in this post two additional "charts." I put charts in quotation marks because I am not trying to make a formal, tidy, structured chart for the most part when I do these tests, I'm just interested in blending colors together and seeing what happens. A lot of artists I know take a much more orderly approach to these types of tests and put them into columns and boxes and apply a lot of order. While I love order probably more than the next person I'm happy to just get in there and mix. I think each artist has to do what is most useful to him. (My colored pencil charts are extremely orderly!) 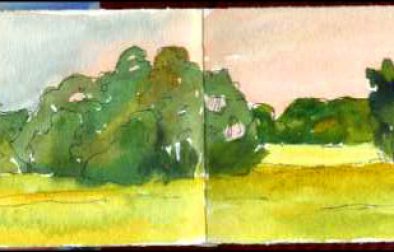 The Best Compliment You Can Give a Bookbinder—and Yourself

As a bookbinder one of the saddest things to see is a series of blank books on someone's shelf. The books' mass represents acquisitiveness, lost opportunities, stalled creativity, postponed engagement in the world and a hundred other sad things. It's frustrating to see. It's one of the reasons I started teaching journaling. I was very sneaky about it—I would have everyone make a book using paper I knew was perfect for the process I was teaching. Then, perfectly timed, when the books were completed we would USE THEM. No one went home without working in their book.

Another Quick Note on Stan Fellows

My friend Terry Garrett wrote to me today to talk about the book I mentioned yesterday—The Cuckoo's Haiku. Well he actually had gone to Stan Fellows' blog! I'm sure many other readers here did so also, but if you didn't, well I'm sorry I didn't put a link to his blog site (just one to […] 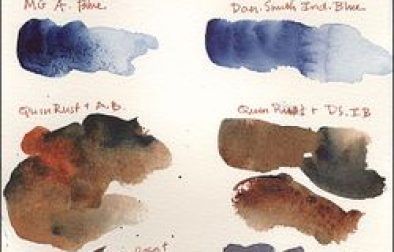 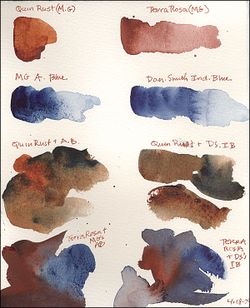 Left: Swatches made testing some M. Graham and Daniel Smith watercolors. Click on the image to view an enlargement.

Last week I was talking to my friend Diane about various watercolor paints I had been testing. Having good "oranges" on my palette is essential because my perfered blue is PB60 and when mixed with the right orange you get lovely neutrals and dark, rich, colorful blacks. In particular I was talking to Diane about my favorite Schmincke orange which is Translucent Orange. (You can see an example of how I might use this in my post today on the Official International Fake Journal Month Blog.)

Diane has posted her own swatch experiments with transparent orange on her blog. I encourage you to go there and have a peek. But you should also go back next week when she posts her landscapes. I've seen them and they are really fun.

But last night we were talking and she mentioned how she didn't get the same pinkish tone I had from Daniel Smith's Red Iron Oxide. I suppose the difference has something to do with the fact I was working from a small paint chip sample. Who knows. All I know is the discussion with Diane made me curious, especially since she mentioned using Cobalt Blue with the colors I had tested earlier. 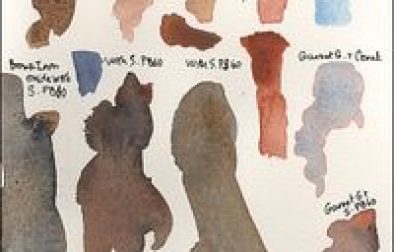 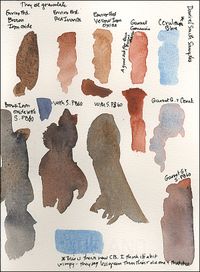 I mentioned a while ago that Daniel Smith is sending out sample cards of watercolor paint (dabs of paint on a watercolor card, attached to a brochure about the paints). Wet Paint, since it is selling this line of paints now, also has these sample cards for walk-in and mail order traffic. Well the other day when I was in Wet Paint I picked up a couple to try out. They are shown on the swatch card that starts this post.

With the exception of the Cerulean Blue I was positively impressed with all the paints I sampled. Let’s just say I’m not a bit Cerulean Blue fan in normal times. I couldn’t get the rich deep blue shown in their brochure swatch (printed), so I found it rather a wimpy color. But I will say this, it is less skewed to green than most CBs I’ve tried, and it is much less opaque and chalky. In fact they list it as semi-transparent. It also has nice granulation. So if people are accustomed to having this blue on their palette but want a bit of a change this might be a paint to look at. 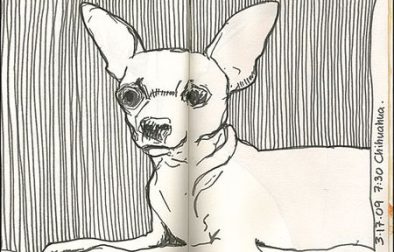 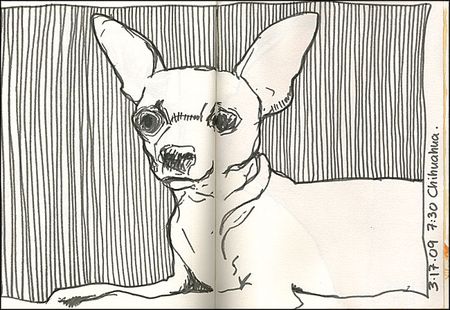 Above: another Chihuahua study in my odiferous journal, which is NOT a commercially made journal, but a journal handmade by me with Velin Arches (formerly Arches Text Wove) for pages. I used a dark gray Faber Castell Pitt Artist Brush Pen for this sketch. Click on the image to view an enlargement (left side of page spread slightly cropped).

I didn't have a visual for this entry so I thought you would enjoy looking at another Chihuahua study. (Must resist their cuteness; do not succumb to their cuteness.) 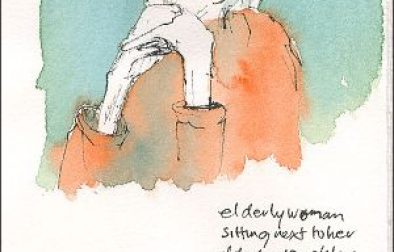 Not Quite Portrait Friday

Left: A sketch of an elderly woman waiting in the doctor's office. She moved just as I finished the arms and before I could define the fingers, but it was the arms that interested me. I threw the paint on quickly after she was called away. (Cropped down from a page of notes.) Staedtler Pigment […] 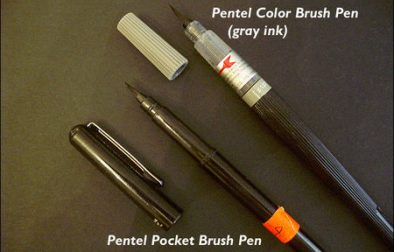 Pentel Brush Pens: The Pocket Brush and the Color Brush 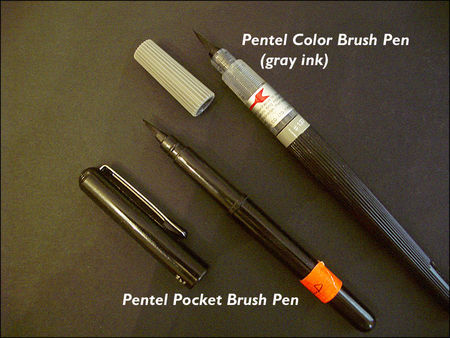 I get a lot of questions about which Pentel brush pen I am using. Consequently I try to always be specific when I post a journal page using one of these tools on my website journal postings.

This post is my attempt to be even more crystal clear about these two pens and their attributes so that if you are interested in trying a brush pen you can know exactly what you are getting, and what results or working capabilities you can expect.

If you didn’t think I could keep a secret you were so, so wrong, but now there is very clear evidence that I can. I’ve known for two weeks that Wet Paint is going to carry Daniel Smith watercolors. I was asked not to mention it on my blog until the paint arrived and they were able to put it out in the store. I was told I could talk about it today. (I would give them a call first because they have been busy and hadn't had a chance to put the display out on Friday when I stopped by.)

The deal is that Wet Paint will now have 121 of the Daniel Smith Extra Fine Watercolors. I've seen the list and the great standbys and must haves are on the list as well as many, many fun colors! All the quins you love will be there!

The other great news, the paints will be available at 40% of list for an introductory period that will last through February.