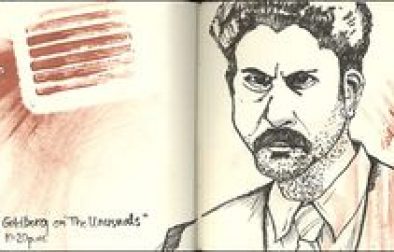 Above: Journal sketch of actor Adam Goldberg on the “Unusuals,” a cancelled 10-episode cop show on ABC this spring. Pentel Pocket Brush Pen and gouache. (Journal approx. 8 x 8 inches square.) Click on the image to view an enlargement.

NOTE: Keep on reading this post until you get to a detail of Goldberg's Chin! Typepad wasn't cooperating when I tried to stack images so there are some large gaps (at least in the preview of this post). Stick with it because I think the detail of the final sketch of his chin is worth it if you like watersoluble colored pencil.

I didn’t discover the “Unusuals” until it had already been canceled. In a way I guess that’s good. I couldn’t get too attached. In a way that’s bad: I watched it anyway and got too attached. The show followed several members of a NYC police department, focusing on cases, but mostly on the characters. I liked that; the friend who suggested I watch it thought that I would like that. Too bad not enough viewers did.

Then on May 27 while I was watching the show I noticed something. There were an awful lot of interesting closeups on actor Adam Goldberg.