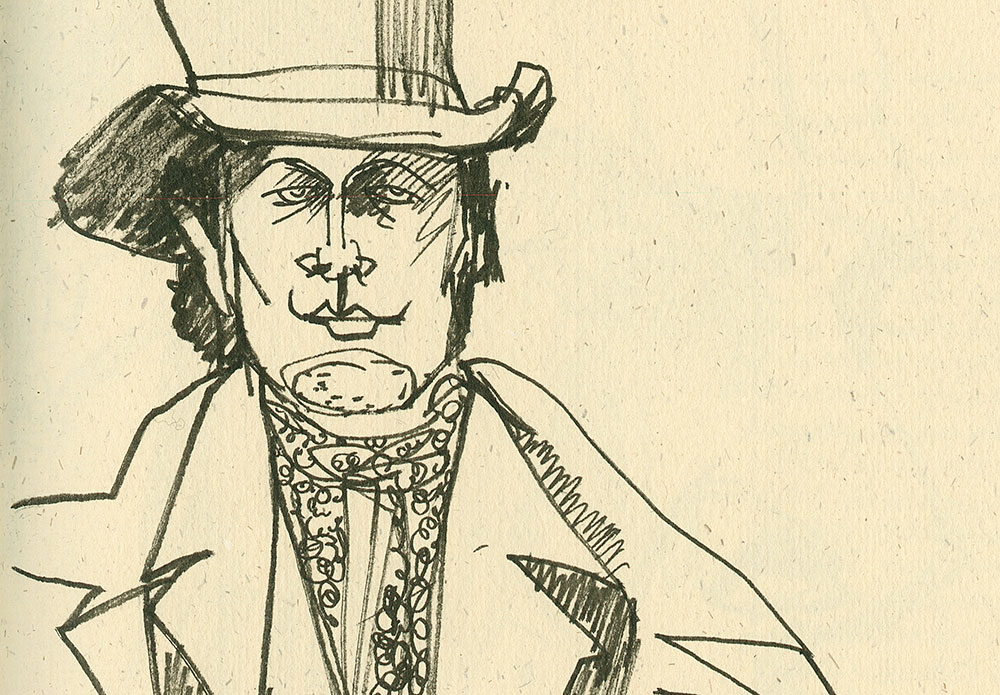 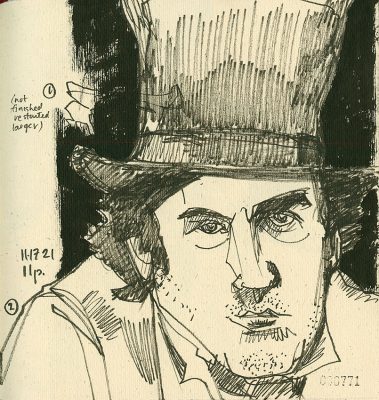 Late at night  I sometimes curl up with my journal and sketch Victorian Fashion, specifically top hats.

Since I started the week with a doodle of a man in a top hat, I thought I would continue along with more Victorian top hats.

Watching dramatizations of the books of Charles Dickens will provide you with lots of opportunities for sketching top hats.

Both these sketches were made while watching “Martin Chuzzlewit.”

Something else that always struck me was all the layers of clothing Victorians wore. Men had the great coat over a suit jacket and pants, but there was also often a vest under the jacket and then of course the shirt.

Then things get a little fuzzy. According the the Victoria and Albert Museum clean white linen shirts were considered undergarments “serving the purpose of protection and modesty, and as indicators of wealth or social status.” This was true since the mid-16th century. In the 19th century shirts became more plain (less pleats and frills). And by “the early 20th century, with a change to a less formal outerwear, the shirt had lost its status as underwear to become a key component of a man’s outerwear wardrobe.”

If you’ve watched any “gold rush” or United States Pioneer dramas on TV you’ll know about the Union suit, a onesie for men. To make things more versatile in all sorts of weather the Union suit was cut apart and worn as separates, which led to long-johns. In England working men were wearing woolen vests under their shirts or jackets.

But in 1904 “bachelor undershirts” were sold by the Cooper Underwear Company. It had no buttons. You slipped it over your head.

The US Navy incorporated this garment into their uniform in 1905.

And in the fullness of time itself became outerwear (and thank you very much because cotton is the fabric of my life; I’m wearing one right now advertising a pig-roast I was not allowed to attend, but was given to placate me; long story, another time).

You can read more about the details of that evolution here in a post by Karl Smallwood.

Both the V & A and Smallwood mention Marlon Brando and the post World War II “rebel” cinema popularizing the T-shirt as outerwear.

What isn’t mentioned is that sleeveless T-shirts were so commonly worn under shirts by all men up to 1934. However,  when Clark Gable, sharing a motel room platonically with Claudette Colbert (probably not really possible if you think about it, is it?) in “It Happened One Night,” took off his shirt and revealed he wasn’t wearing an undershirt the T-shirt industry took a huge hit in sales. If Clark Gable wasn’t wearing a T-shirt why should any man?

So it was the 1950s “rebellious teen” movies that revitalized that industry.

And then we got the 1960s when T-shirts became billboards advertising anything from your motto to live by, a band, a favorite cartoon character, your graduation year (Class of…), or even pig roasts that pre-dated the one I wasn’t allowed to attend…

Yep, all these things run through my mind when I’m sketching late at night. 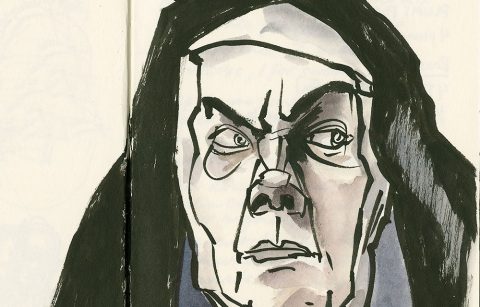 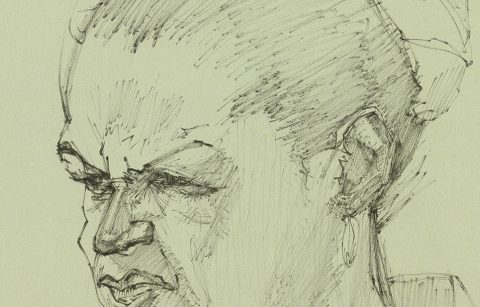 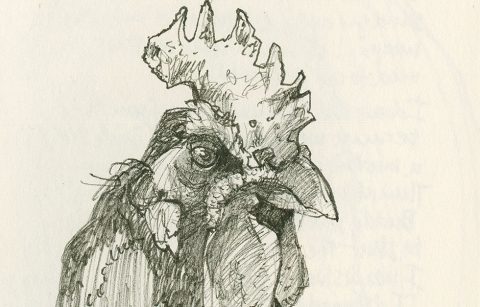