Saying Good-bye To The Bell Museum 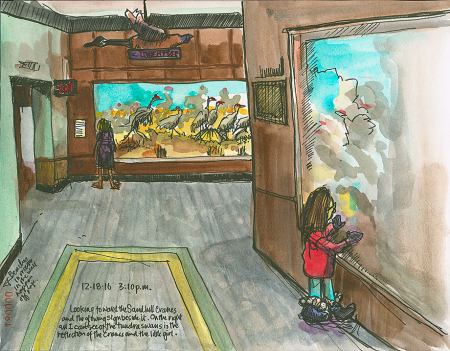 Sunday was the Urban Sketchers Twin Cities sketch out at the Bell Museum. I added the afternoon to my schedule of visits I set up when I started my “Bell Museum—13 Weeks To Say Good-Bye” project at the beginning of October.

I’ve gone so many times to sketch at the Bell over the course of my life, especially in the past 38 years when I actually lived full-time in Minneapolis, that I lose track. A few weeks ago, as part of the studio shake up, Dick helped me move all but my 2015 and 2016 journals into the back room with my other stored journals. When he had to go off and help the folks my progress slowed. I found myself looking in some of those journals I was shelving “out of the way.” It surprised me how often, in flipping through the pages, there would be a sketch that I made at the Bell. Sometimes I might just be walking across campus and take a moment to duck in and make a quick sketch. It made me smile to come across them.

Mostly at the Bell I sketch animal portraits and studies. I look at angles. I sit on the floor and look up. I sit at the side and look askance (the animals never mind.) I make notes and draw corrections right on my page. I’m working as fast as possible, treating the specimens as live—because this for me is practice for life drawing—for finding animals in the forest, on a trip, or in the neighborhood.

Going weekly (or more) to the Bell in these past several weeks I’ve realized that while some specimens won’t be making the trip to the new building on the St. Paul campus, many will. So what I’ll miss ultimately the most is the actual place, the physical space, the physical building.

I’ve had a lifetime of missing places. By the time I went to university and stopped living with my family I think we had moved 17 or 18 times. (I would have to count them up.) That includes two transPacific moves (two out and two back trips, though I was in the womb for the first out trip).

You would think with all that practice saying good-bye I would be at peace with letting go, but it wasn’t until I started this project to consciously say good-bye to the Bell that I realized I am finding this change harder than I expected—there is something of letting go of youth in this transition. (And I’ve never been one to hold on to my youth.)

There are sights, sounds, and smells at the Bell that will always be with me. And they all have created emotional attachments in my memory. There were trips made with friends to sketch. Now some are dead and I go in part to be with them. I sit with their ghosts and we sketch together, always content with our silent, shared industry.

Somedays when I go to the Bell there is complete silence—but the silence is different from the silence one used to have years ago with the school term going on about one. There is a silence of shutting down. Other times there is the typical noise of school children, often screaming, always laughing. And always there is the sound of birdsong or animal calls (if kids are pressing buttons).

What is also constant is a quality of light (low level, about which many sketchers complain, but which I find oddly comforting and essential to the tone of wonder being set).

I’m not a painter who does interiors, but in these last few trips I’ve found myself turning away from my warm up, not to another taxidermied specimen, but to face down a hall or across a room, and see something I’ve seen 10,000 times before and think, OK, maybe that’s the thing to sketch. Because while many of the animals will be making the move, the wall color, the paneling (which seems to sigh in the heat of the summer in this unairconditioned building), the signs, the carpet—they all won’t be going. And yet we notice all these things when we focus on the exhibits. It all seeps in.

I turned on Sunday towards a view. I turned down the hall from the “Big Woods” and saw one of my favorite dioramas, the Sandhill Cranes, with its glowing signage in the paneled wall. Had I been an architect or artist who always sketches interiors I might have allowed space on my page at the left, for the recessed benches in the walls. I will miss those benches.

As I sketched a family came up and stood at the window along the right. That’s actually the child who stood there, reduced to a rough gesture here.

Dick claims I was simply using an opportunity to include a self portrait in my Bell project. He laughed at my cunning.

At her age I didn’t wear glasses, but my hair was long and loose. People laugh to learn I only started braiding my hair in college.

As I sketched her quickly, because I thought it would be nice to have someone there for scale, it did strike me that she bent her foot up against the paneling just as I still do when I stand and sketch. There is a desire to press forward and enter that tableau. I had it at her age. She had it Sunday with her family herky-jerky around her. She stayed still, absorbed with yearning.

She was looking in at the Tundra Swans, which is such a lovely exhibit. From my perspective there was only glare and the bounced reflection of the Sandhill Cranes.

I wondered, when I went to paint her red jacket, though she was long gone, if decades from now she would remember what it was like to be in the Bell Museum, the OLD Bell Museum, on a frigid cold day when the songbirds were still singing.

Note: The Old Bell Museum closes on December 31, 2016. You still have a few days to get over there and make some memories. 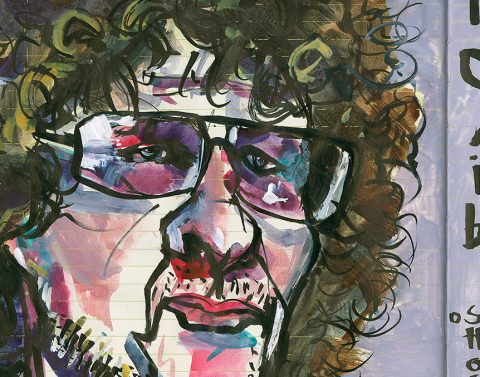 In Context: No Political Comfort From Howard Stern 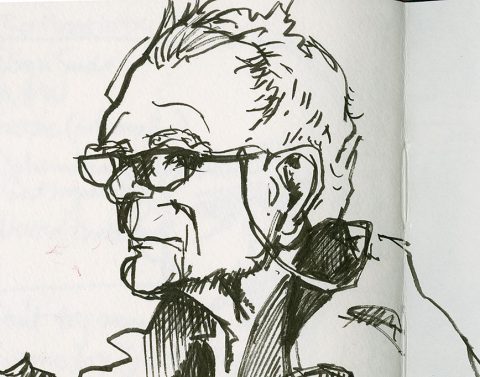 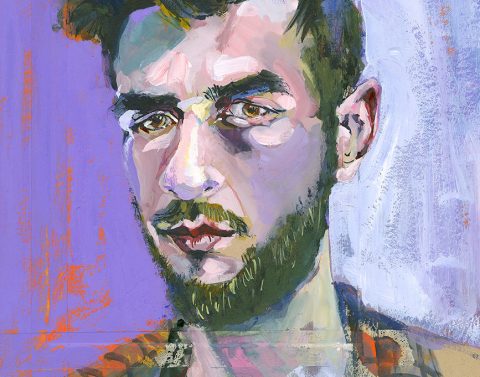 The Piecemeal Portrait Tutorial That Wasn’t