Gouache in the Seawhite of Brighton Journal 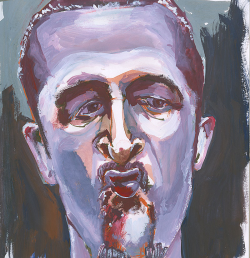 Left: 8 x 8 inch pen and gouache sketch in a Seawhite Sketchbook of the same size. Under sketch is done in orange and red Uni Posca extra bold tipped paint pens. (The tips are about 1/4 inch wide chisel tips.) The sketch was then refined with a Platinum Carbon Black solid felt tip brush pen (You can still see pen lines around the eyes). I then painted with Schmincke gouache using colors I had out on the palette.

Before I left the series (for now) of working on learning the shape of my friend's face I thought it would be fun to include this fun distorted image. It's hard to find models who are so secure they can really pull faces!

Left: Detail in which you can see the pen lines under the gouache.

I also wanted to post this image because I had a lot of fun working with gouache on this paper. It seems like a lightweight paper (and it is compared to many that I use) but it is a hardy paper. As you've seen in other examples from this book you can work with multiple layers of watercolor on it. As you can here you can work, and even rework with gouache on this paper. The paper will buckle slightly when you paint on it with gouache, but if you control your water it won't get out of hand, and it is easily flattened for scanning.

See my other posts on this commercially made journal/sketchbook for information on how it is structured and how it holds up to other media. I will have a couple more posts on it containing review items coming up.

UPDATE: 10.18.16, 10:50 a.m. Paul's comment below made me wonder if I had any in-process photos of this sketch. Sometimes I take a photo at each "stage" as I'm working. So I looked and found the following photo.

This was shot with no consideration for light. I forgot that I put brush lines in so quickly. And then played with corrections in not only orange but gray Uni Posca. 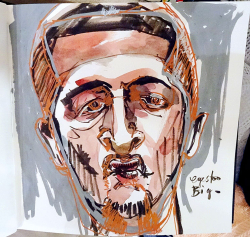 Left: The light washes of orange were laid in before the gray correction lines were in. Looking at the quick brush pen sketch I could see my proportions were off and actually thought about stopping because I thought the eyes were too big. Actually the eyes, nose, and upper lip were the only things that remained constant. I saw as I played with the gray marked that I need to lengthen the face to get the proportions to work. Look particularly at how far I drop the chin with orange marker that I stated again after the gray. Follow the jaw line down from the ears. I don't have a photo of the next phase where I went in with the red marker to restate some things (hairline, base of ear), because I went right into painting. This happens a lot. I intend to take photos because something isn't working and I want to have a record of what went on so I can learn from it in retrospect, but when things start to click and I see the way forward and I forget to stop and take a photo. What is very interesting to me is that the eyes, nose, and upper lip were the only things that didn't change from the moment I put them down (except I did change the direction of the gaze in my final painting of the irises and pupils).

commercially made journalsgouachePortraitsSea white of Brighton 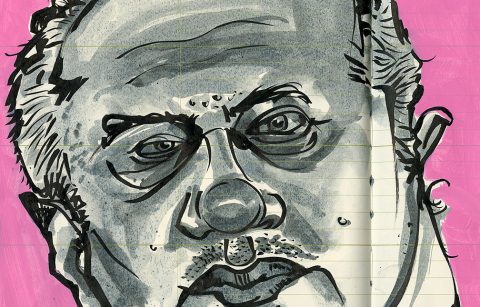 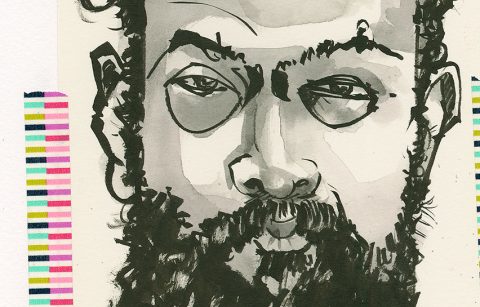