Some Ideas Get Lodged in Your Head: Working in Series—and On Being Dangerous

Above: A a warm-up page spread from a smallish, 5 x 7 inch journal I made with Arches Text Wove (Velin). I've been carrying this journal around because it is small and doesn't add to the bulk of what I usually have to carry.

This week I'm sharing some pages from my journals that show a little bit behind the scenes as I work on a series. Actually there are two series here, my father-in-law CR and sofa-themed art (you'll find out more about the latter later this week).

Most visits these days to CR I try to sketch him a bit. Part of this is to both remind me how much he looks like his son and how much he is different from his son. Close observation will help with this.

I'm also increasingly conscious of how frail CR is. I realize that there isn't a whole lot of time left for this activity.

Happily CR enjoys sitting with me and chatting while I sketch him. I lend him an ear, he lends me his visage.

On this particular day I warmed up by doing loose sketches of his head from various angles, and one quick attempt at his newly proportioned body. (Don't think aging will do this to you? It will.)

Then Dick, who had earlier shaved and showered his father, took CR out for a short walk. I stayed and sketched pillows and the chair-pillow-bookshelf vignette, all in practice for some art I was making to donate to a fundraiser. (The other series.)

Then Dick and CR sat and had a "technical" discussion. I've been listening to these for so many years that it's quite pleasant and I can easily follow along. On this day the chat was different. When Dick asked his father questions for his opinion on technical matters CR actually said, "I don't remember." He's never been at a loss for technical information or opinion. Of course memory loss as well as general health isn't always linear. Things retreat, return, and depart finally. It's difficult in the stream of life to recognize those moments of final departure.

I just keep sitting there and listening and sketching.

As they wrapped up the conversation CR motioned with his head to me and I brought the sketch over. "Woah," he said, "That's a likeness."

"Thank you," I replied. I was pleased with how I had handled the shading on his head, his white hair, and the twist of his neck as he turned to talk with his son.

"You did that just now?" He asked, in a way that wasn't asking, but more a compliment that I could do it that quickly.

"You're potentially a dangerous woman," he replied smiling.

"I think we're way beyond that 'potentially'," I laughed.

Dick laughed even harder, "Yes, that ship has sailed."

It is very comfortable to sit in a room and sketch with two people who understand what you are and aren't frightened of that. I think this is the true meaning of family.

I have had to work very hard to get here—to accept this. To trust it.

It's just one of the many gifts my in-laws have given me along, with their son.

Below: Sketch of CR while he talked with Dick about technical matters. The two lines of text at the bottom of both pages are from a technical conversation they were having. Dick stated something and CR questioned it. And Dick told him where he got the information. The conversation went on a bit concerning these "free engineering magazines" but I didn't write the rest down. We were already involved in the other discussion I recount in this post, and record at the top of the recto page of this spread. 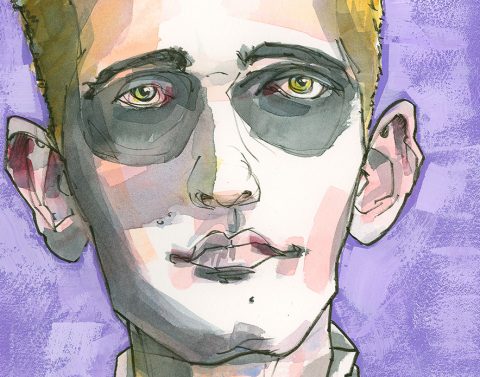 Do You Stop Or Keep Pushing? 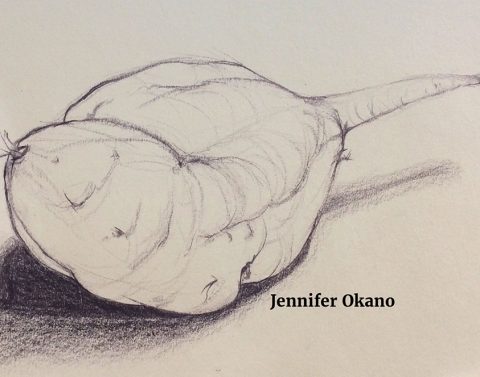 The Daily Potato: A Look at a Daily Drawing Project 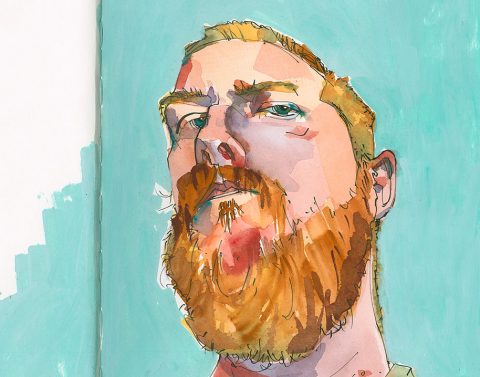 In Context: Looking at the Arteza Watercolor Book