Sketching at the Charlie Maguire and Steve Cormier Concert 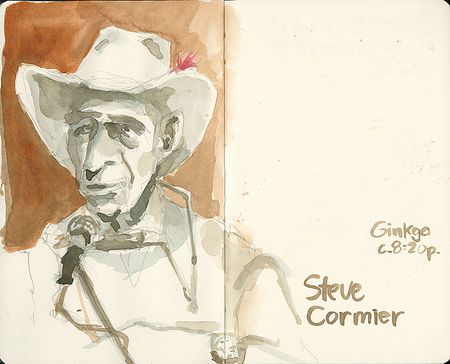 Above: Pencil and watercolor sketch of Steve Cormier in a Moleskine with the new whiter and more absorbent paper. Click on an image to view an enlargement.

It was great to get out and hear Charlie Maguire and Steve Cormier singing songs of cowboys and farmers on Friday, May 20 at the Ginkgo on Snelling in St. Paul. I love to hear him sing, but he also plays the harmonica! And that just makes me smile!

Cormier came in from out of town for the performance. Maguire is local. You can find him on Facebook here. I suggest you get on a list so you know when he's performing. It's always a great evening.

I didn't sketch Maguire as there was a very tall man in front of me blocking my view—one of Cormier's brothers. Also Maguire is a very animated singer, as I wrote in a note to his wife who was sitting next to me. You can see that note on the journal page below.

Cormier told anecdotes in which his face kept coming back to the same position so that was a bit easier for me when sketching.

Funny coincidence: Sunday I went out to take a tour of the Pillsbury A Mill—the old mill building that has been converted to apartments for artists. (It is beyond cool!) Just before descending into the hydropower "tunnels" to see how the water comes into the building to generate power a tiny woman came up to me and said, "Were you at the Charlie Maguire concert on Friday?" "Why yes I was," I responded smiling. "I recognized you—you were holding the same sketchbook, and of course the braids," she replied. (So much for my ninja stealth cred!)

Charlie's wife Linda was standing next to me. It was her idea that we come on the Mill tour. I introduced the concert goer to Linda. She continued, "I love hearing Charlie sing. He always does a great job. It was a great evening. I am so glad I could be there on Friday to hear him sing with Steve."

It definitely was a fun evening. When they wound up I couldn't believe two hours had passed. While Cormier has returned to New Mexico, you definitely should keep watch for opportunities to hear Maguire singing here in Minnesota!

Note: I'll have more to say about this Moleskine I am working in later this week or next when I've got more pages filled up.

Below: Another page spread of sketches from the evening, included Cormier's oldest brother who was also in attendance. 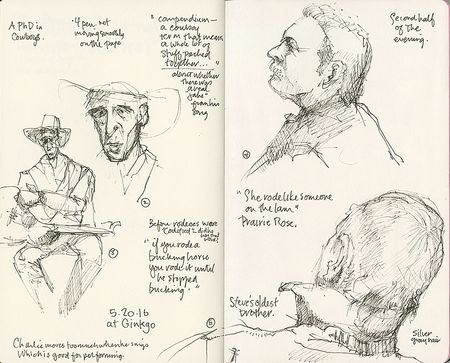 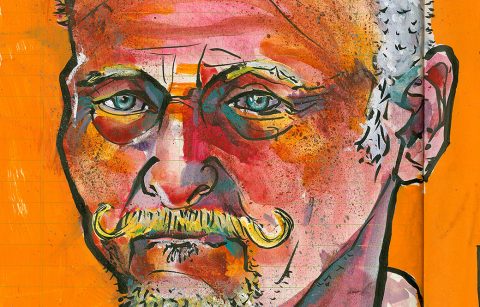 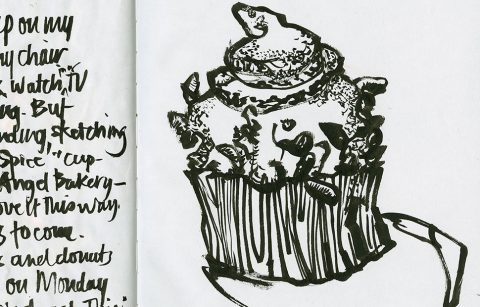 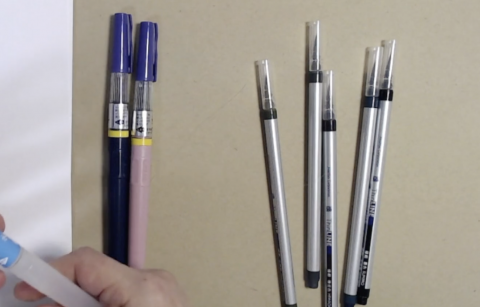 Some Brush Pens with Color Ink