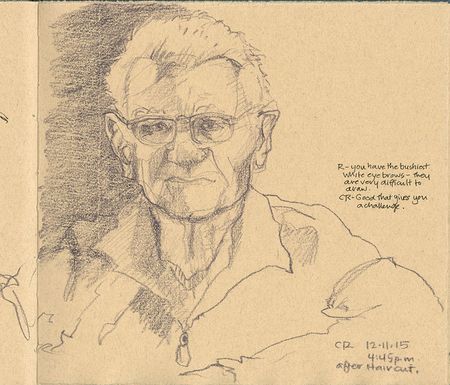 Above: Dark purple Prismacolor Pencil sketch in an 7.5 inch square handbound book containing Nideggen paper. You can clearly see the wavy laid texture in the background and clothing. I love this paper. This is CR, Dick's 94-year-old father, sitting quietly, posing for me. I had just given him a hair cut. It wasn't quite smoothed into place yet! (His hair is snow white.) Click on the image to view an enlargement and see what else CR had to say to me.

Even as CR’s mind fades even more he is more and more eager to help me. After this session I told him “You could model professionally.” To which he replied without missing a beat, “What’s it pay?”

Over the past six months there has been an increase in frailty and a decrease in memory. The other day, before going to the eye doctor we talked about his wife’s new teeth (because she is wheelchair bound and he is too frail to help her she is in long-term care in the same complex, while he has his own assisted living apartment). Less than 30 minutes later he expressed surprise when I said I was going to visit Phyl. “She’s gone,” he said, in all shocked seriousness. And when I told him this wasn’t the case he insisted someone told him she was. I don’t go down those paths of “who said” any more, because he can’t follow them. “You must have had a particularly strong dream,” I replied. She’s alive and well and I’m going to visit her now. (He was too exhausted from the trip to the eye doctor which was a 3 hour round trip because of the speed at which he moves these days even when we park as closely as possible, e.g. 8 months ago he could walk from his apartment to the front door car port where I would pick him up in 3 minutes, now he needs 8 or 10 minutes. I can walk it in less than a minute.) “There is a sign on your door,” I said, “to remind you to call her. I put that there.” “Thank you,” he said, cheering up, “I’ll do that.”

I suppose the first thing people will notice looking at today’s image is that CR looks like an older version of Dick. Hence the reason I call Dick, “The Clone.”

The next thing you’ll notice is that the antihelix of the ear on the left (his right) is way out of scale with everything.

I find it interesting that as I draw I sometimes become so obsessed with something that I don’t remember to judge it in conjunction with its surroundings. I am fascinated by ears in general. But on this particular day the difference in them was something I kept coming back to. It was only after I looked at the drawing with a fresh eye an hour later (when I got home) that it leapt out at me. Why didn’t it leap out before? I was enjoying all the other bits I’d got right I’m sure. I had a good laugh.

He really is a great model. Both he and Phyl are just vain enough to want to be captured accurately. A little bit of vanity and self-assurance for a model are fine characteristics because the model is not only able to invite your gaze, but remain unfazed by your most strenuous squinting! CR and Phyl both have a great sense of self-worth and confidence, that shows in the photos and sketches I’ve made of them.

That great sense of confidence is a fine thing for me too, because they instantly forgive any draftsman’s errors. And they are happy to pose again, and again. Their patient belief in me, and in my ability to "get it right," has buoyed me up my entire adult life. 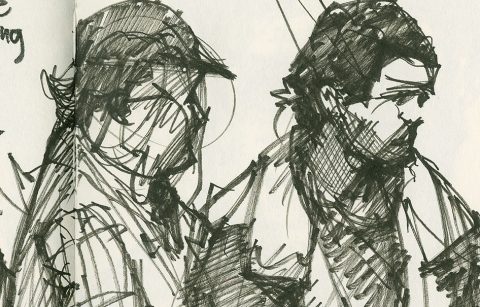