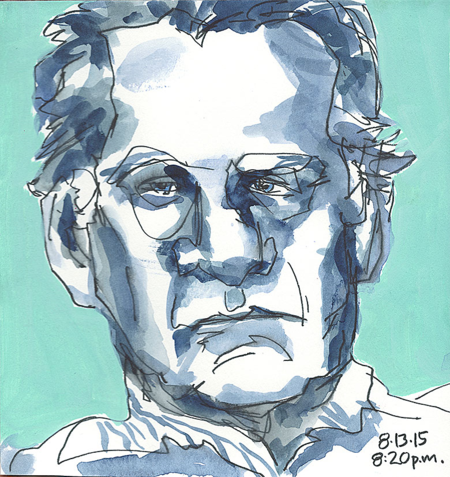 Above: About 6 x 6 inch square of white Stonehenge. I did a quick sketch using a Pentel Sign Brush Pen (about 4 mins.), of Dick. Then I ran away and got some Schmincke Pan watercolors. I only used the Indanthrone Blue (Dark Indigo, PB60) but there are areas of gray tones, that’s the ink bleeding. It actually held pretty well on this paper. But you can see it bleed about his right eye (on our left) and under the chin, to name two places. I worked with a “real” brush—a filbert. The background was added at the end—Montana Marker. I was squinting and sketching without my glasses because I couldn’t stand wearing them one more second.

What did I learn today? Don’t be too quick to put your sketch on the scanner! You can see where I smudged the paint on the left (our left) side of Dick’s nose.

OK, I already knew that. I learned that the Pentel Sign Brush Pen (which has a funky solid, hard but pliable tip of some sort) doesn’t bleed all over, but it does bleed. And so for lighter colors it might bleed too much. Maybe this year at the Fair I should just work monochromatically?

R: Dick don’t move all around, you started with your head back a bit you need to keep it there.

I notice a slight annoyance in the eyes, Dick rarely shows annoyance.

Dick never complains. It must really be painful. He barely registers any emotion, so I don’t know whether to give in. I decide not to.

R: Just a moment or two more. Rest, but don’t go away, while I go get some paint.

I run through the house looking for the right palette and return a minute later.

About 3 minutes later, I flip it around to show him.

R: I like it. I just made vague shapes where your eyebrows are and then ignored them.

We laugh. I really don’t think Dick realizes that his eyebrows are poised to take over the world.

I have some more pens to test on the watercolor paper I purchased to take the Minnesota State Fair this year (I can’t bind because my arm and shoulder are in bad shape again; but you know what, I didn’t want to take a casebound book this year anyway.)

If I can’t find a pen that dries quickly enough on the watercolor paper I got, so that I can paint quickly, I’ll probably default to Stonehenge and use my Faber-Castell Pens and such, and just give up the idea of this funky “brush-tip.”

Note: Stonehenge is a lovely paper that I enjoy sketching on. It is a printmaking paper, but lots of folks draw on it, and I like to paint on it. I especially like the grays and kraft brown for gouache, but I’m not going to use gouache at the Fair this year, and I really wanted to use a watercolor paper. We’ll see.

All of this happened after a long, long day of computer work, punctuated only by a brief escape to Wet Paint. This is the time of year they see the most of me. You’d think I was preparing to go to France!

The Seventh Minnesota State Fair Sketch Out is Tuesday, September 1, 2015.

Come and talk paper choices with me at the meeting! I’m looking forward to seeing your sketches.