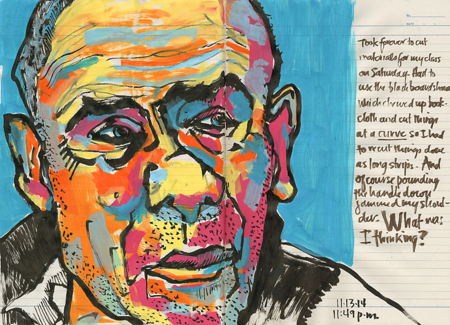 Above: Today's image has nothing today with today's post, I just like to start with an image. I should have watched a Jimmy Stewart movie and drawn a sketch of him. I never have sketched him. I did once, towards the end of his life, end up standing about 30 feet away from him. He was at the dedication of a building at the University. I was passing. I stood for a moment. Regarded. Then I kept passing. Instead here is a brush pen and Montana Marker sketch from one of my Japanese Lined Journals (about 9 x 11 inch page size). It was late and I wanted to sketch something before going to bed. Some actor I don't know in an Italian movie.

When I was a child a watched a million hours of black and white movies that the local TV stations in Melbourne, Australia seemed to run almost on continuous loop. One of those movies was “Call Northside 777.”

Based on a true story, this 1948 movie stars Jimmy Stewart as a crusading reporter who is trying to free a man wrongfully convicted of killing a cop.

It just took one viewing of “Call Northside 777," to make me believe I wanted to be a reporter when I grew up.

(I’ve also seen every episode of Samurai at least 20 times each and we all know what came of that.)

When I first saw "Call Northside 777" I already loved newspapers. Charles Dickens had worked for newspapers and run several magazines. Mark Twain had been a newspaper printer and writer. Based on my understanding of history I even believed it was patriotic to be a newspaper reporter—so many of the founding fathers were writers and printers. I still believe a strong news system is essential to democracy, but I see it all with a little more cynicism.

The other day when I was writing the “voice-overs” double feature I started thinking about the most influential movies in my life.  (Some of them I’m going to write about in this post.) I was struck with how my future was influenced by my viewing choices. I didn’t grow up to be a Samurai (or a cowboy) but in a way, as a teacher and mentor I help people fight their creative ninja everyday,

The following films are suggested not only for entertainment value, but as a look at how newspaper reporters have been viewed in popular culture, and by that shaping, how our views of what a reporter should and shouldn’t do have been shaped. You can’t have a movie about newspaper reporters without touching on the topic of ethics. When it’s your responsibility to “report” you have to make choices and we all make choices based on our own personal ethics. This discussion is “value added” to the entertainment aspect of these films.

I also think that in the movies the newspaper reporter comes to stand in for “everyman.” And he (or she) reminds us that we need to run our lives and our choices by some sort of ethical code.

Each generation will view those who gather and report the news differently, but in an age where newspapers seem to have less and less readership and influence and its replacement, TV, is taking a hit, the new mode of news sourcing on the Internet will bring its own ethical challenges. This is something you can talk about with your friends after you watch these movies.

But first a little bit of newspaper history. Something interesting happened in the 1890s in the U.S. Joseph Pulitzer (New York World) and William Randolph Hearst (New York Journal) fought an epic circulation war for the hearts and minds of New Yorkers. They not only sensationalized the news (and there was some pretty sensational shit going down at the time) their reporters became active participants in the news—Hearst created his “Murder Squad” of gun toting reporters who beat police detectives to the scenes of crime and often made off with crucial evidence. You can read about this in many books, but Paul Collins’ “The Murder of the Century” which I wrote about on Monday, does a nice job giving you the essence and flavor.

The actions in the age of yellow journalism changed newspaper reporting in the U.S. for the next 80 years, right through Watergate. (OK, forever.) It’s little wonder the world thinks all U.S. journalists are in the CIA.

Hearst viewed this as “the final state in the evolution of the modern newspaper. Action—that is the distinguishing mark of the new journalism. A newspaper’s duty is not confined to exhortation, but that when things are going wrong it should set them right if possible.”

The debate in journalism schools has never stopped.

And now here are some movies that helped me develop my own ethical code:

I believe it is significant that it took a journalist to bring one of the most powerful stories of ethics in journalism and the role of the reporter in society to the screen.

This movie was based on the play “The Front Page” (which was also made into a 1931 movie of the same starring Adolphe Menjou as Walter Burns the editor and Pat O’Brian as Hildy Johnson his ace reporter). Ben Hecht, a noted crime journalist from Chicago wrote the play, wrote the screenplay for the 1931 movie, and worked uncredited on the screenplay of the 1940 film version.

Despite the lighthearted energy, fueled by the chemistry between Grant and Russell, that fills “His Girl Friday,” this is a serious movie about serious issues, proving in almost every scene that the way to look at the hard issues of life is sometimes through comedy that makes you cringe and laugh at the same time. Comedy can be the mirror we see our truest selves in.

“No, no, never mind the Chinese earthquake for heaven's sake…Look, I don't care if there's a million dead…No, no, junk the Polish Corridor…Take all those Miss America pictures off Page Six…Take Hitler and stick him on the funny page…No, no, leave the rooster story alone—that's human interest.”

The acting in this movie is breathless, overlapping, delightful, and heart tugging all at once. And all at the same time it takes a hard look at society, government, and of course reporters. Do you report the news or are you an agent…

I have to say that the few times I have been in a newsroom it has pretty much been exactly like this.

This movie reminds us “Bad news sells best. Cause good news is no news.” And it definitively answers the question of what you’ll become if your ego blinds you.

When a man becomes stuck in a mine collapse, down-on-his-luck reporter Charles (Chuck) Tatum milks it for all the human interest he can manufacture, with dire consequences.

Together these three movies make for a thought provoking evening.

Make A Weekend Film Festival of It

I think it’s best if you watch the previously mentioned 3 movies all in a row, maybe with a break for a walk. If you’re still up for more newspaper reporters you might want to take a look at—

And if you want something a bit more recent you might watch: All the President’s Men; 1976; directed by Alan J. Pakula; and starring Dustin Hoffman and Robert Redford as Woodward and Bernstein—who uncovered the details of the Watergate scandal. Many argue this marks the end of the great age of newspapers.

"Zodiac" captures the era of the late 60s and the 70s so well you can smell the sweat on people in the hot summer air. I felt like a young teenager again, returning to this country, spending my free time in dusty stacks and file rooms researching—because I don’t think you should move anywhere without investigating the local serial killer.