More Fun with the Squeezy Pens 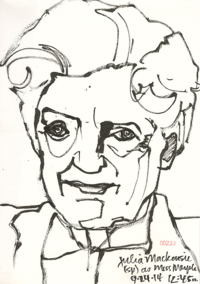 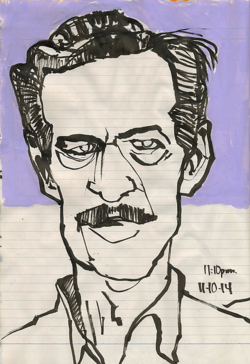 Left: Actor Arthur Space, known for lots of roles, but who played the father in the National Velvet Television show (which ran continuous reruns in gymkhana crazy Melbourne, Australia). I caught him one night in an episode of "Perry Mason." Pentel Color Brush with black pigmented ink on an 8.5 x 11 inch (or so) page in my Japanese lined paper journal (in which the paper is pretty gray). With Montana Marker in the background: a lilac I blended.

I am addicted to the Pentel brush pens in one form or the other, but the squeezy ones like the Colorbrush, even though some are dye based and not lightfast, are too fun to resist. So today I've got a couple more sketches using them. And of course something else I really cannot resist—character actors.

Left: Julia Mackensie as Miss Marple—a quick sketch with a squeezy pen. She's a recent star with a lovely but interesting face regardless of who she's playing.

Are the character actors I was exposed to in my childhood, with my constant TV-viewing and watching of movies easier for me to draw because I have seen them so frequently and can dissect their faces with some sort of internal preset? Nope. But there sure were interesting faces on TV before the homogenization of the last few years.

Don't know what I mean by a squeezy pen? See some squeezy pens here in a post about the different Pentel Brush Pens. (But there are also watercolor brush pens that are squeezy from Bienfang, you can search for them in this blog's search engine to read what I think about them. 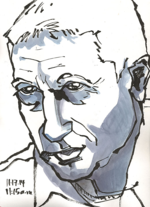 Left: 9 x 12 inch sketch with a pigmented Colorbrush (waterproof), but still squeezy! I added a few washes of light gouache. This was an extra on a recent show but I don't know the actor.

Some nights it seems I can't even remember what the show I'm watching is about because I spend so much time sketching, either stopping the TV or letting the TV run and paying attention only to what the people look like. I think at night while I sleep, my active, chronologically aligned, 3-act structure-dedicated brain, mashes all the images together in a new story,

I think I hit the jackpot though when I stumbled upon a British sit-com staring actor David Jason, shown in the next two images from my Japanese Lined Journal. Both are made with a squeezy Pentel Colorbrush with black pigment ink and a background of Montana Marker.

The first spread has some text obscured for privacy. 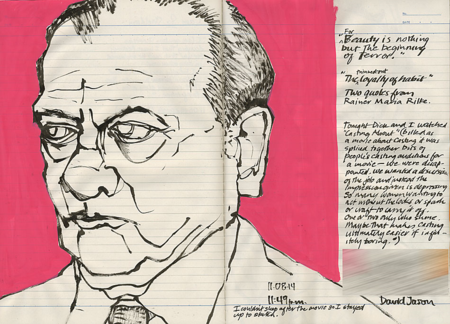 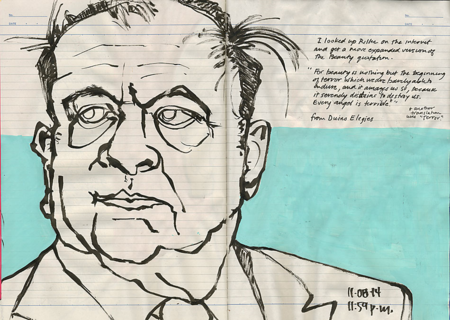 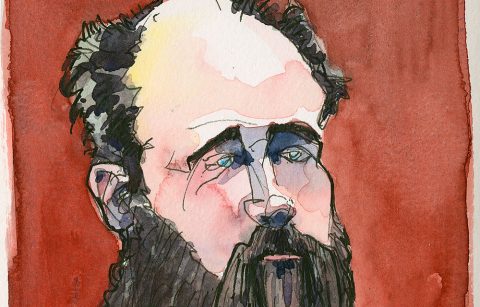