How I “Doodle” AND Get Ready for the Minnesota State Fair 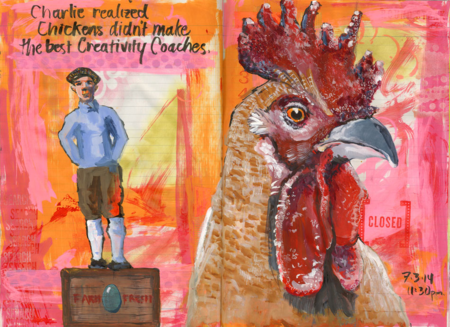 Above: This is the way I doodle. Sketch a figure. Then sketch something on the next page (here a chicken head, because I need to practice chickens for the MN State Fair), then try to link the two together and because nothing jumped to mind, put the figure on a box as if he's practicing public speaking, and then let an idea pop into my head and have fun labeling the box. In this case when I was working on the chicken I really pushed all sorts of levels, not to get a cohesive image of a chicken, but to try different things for when I go to the fair. I sketched (from a 2012 Fair photo) with a Pentel Pocket Brush Pen. Then I added layers of gouache. Then I ended up using a fine tipped white gell pen for some of the lines. See the detail below.

For the past couple months I've been working in Japanese Lined Notebooks with paper that definitely isn't supposed to take wet media—but I've been using wet media on it and having a ball. For the background in the image that opens this post I begain by covering the page with random strokes of orange, raspberry, and pink Montana Markers (acrylic paint). When that was dry I used some red rubber stamp ink from a re-inker to make some random smears on the verso (left) page of the spread. I also stamped some word stamps on the far left and on the right (top right and far right), though a lot of that was obscured by what came later. I stuck down washi tape, painted over the washi tape, and then rubbed some green rubber stamp ink on both spreads. I also did some stenciling on both pages (most notably behind Charlie's head on the verso page). The pre-painted pages stayed empty for a couple days until I started sketching. For the order of the sketches and my emerging idea read the caption above. 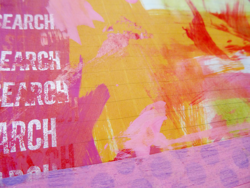 Left: A photograph of a portion of the prepainted page spread before I did any sketching on it at all. It's a photograph so the color isn't as correct as that shown in the scan. This is the bottom of the left-hand page. Click on an image to view an enlargement.

In the detail of the prepainted page before I sketched on the spread you can see the pearlescent ink which appears throughout the spread. It's visible in the first detail photo because I shot the photo at an angle. 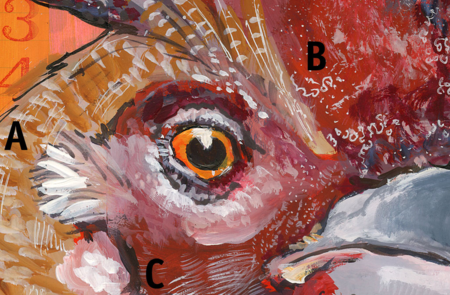 Above: A detail of the Rooster's head so that you can see some of the different things I was trying. At "A" you can see thin white PEN lines over the layers of gouache. At "B" you can see small squiggles and dots also made with the white gel pen over the gouache. Elsewhere the white is all gouache, including the strokes at "C" and the dots leading up from that to the right, where the pen dots begin. For the strokes at "C" I took a filbert, pressed the water out of it, dipped the tips of brush's hairs into moist paint (not wet paint), pressed the hairs of the brush between my thumb and index finger so that the ends spread out and then stroked in the lines. I like this type of line more than the white gel pen line, but I wanted to see if the gel pen saved me any time. It actually didn't.

For me the journal provides a great space for working out visual vocabularly—how do I want to attempt to handle striated feather patterns? Are the options I try too labor intensive for the conditions I'll be sketching under? Are the options visually appealing? How can I best show small detail, such as skin texture on the comb—do I need to avoid it (as too fussy or time consuming in the conditions I'm working in); is it fun to get fussy; how and I going to deal with issues of available light and paint drying time; can I apply enough gouache in the time frame I'm considering to make it a useable approach; and which pigments do I want to be sure to bring along?

After thinking about all those things and doing a bit of a dry run I hope to come up with a plan of attack to use at the Minnesota State Fair.

The reality is that even with a plan of attack I may just toss all the planning aside and go in a totally different direction. But I always find that evey second of this type of pre-planning and doodling makes me comfortable to toss planning aside when I'm at the Fair.

Page spreads like this also allow me to judge whether or not the paper I'm working on is a suitable paper for mixed media. I have to say that the notepaper I was working on here is actually amazingly versatile.

I don't know yet what type of journal I'll take to the Minnesota State Fair or which pens I'll take. I'll probably take a palette with pans of gouache—since the gouache brands I use Schmincke and M. Graham) both rewet well and make lovely light washes so it's like getting two paints in one.

I know I won't be taking these Japanese Lined Notebooks to the Fair because they are too floppy. While they have sewn signatures and open flat, the covers are soft and the large size would be difficult to hold open in the crowd jostled confines of the MN State Fair barns.

I hope to be able to go multiple times to the Fair this year, so I may try multiple approaches. I also know I hope to video tape people sketching at the 6th Annual Minnesota State Fair Sketch Out so that we can have a fun record of the two-day event.

The planning phase is all part of the excitement of the Fair for me.

I hope you're making your own plans for the Fair. But even if you can't get to the Minnesota State Fair this year, or any fair near you, I hope you're working out modes of attack in your visual journal.

Note: The 6th Minnesota State Fair Sketch Out will be held on Saturday, August 23, AND Tuesday, August 26. More details to follow shortly. 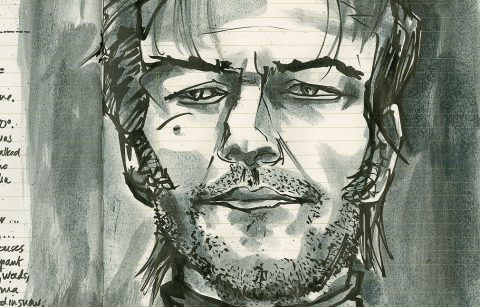 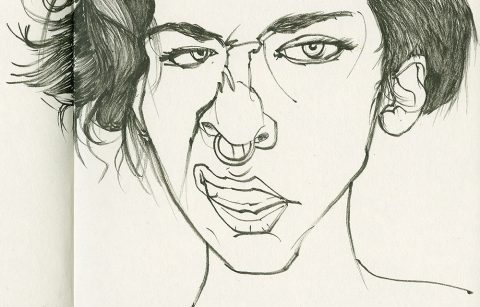