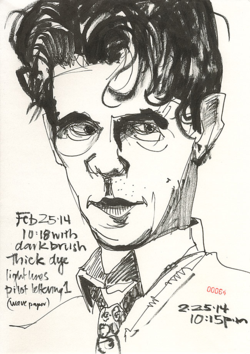 At the end of my Project Friday post last week I wrote a mini review of Wave paper. My last sketch of Phil Davis, in pencil, was on this paper. You can click on that link to see the full post, but since my review comments were short I've repeated an edited version (no reference to the Phil sketches) below and added a few additional comments.

Wave paper is a 130 gsm, alpha cellulose, double sized, pH-neutral, buffered, chlorine and lignin free paper from Kunst & Papier. I did some brush pen work on it and the tooth of the paper, perfect for capturing graphite and colored pencil, does marvelously interesting things with your ink-brush lines. Marker used on this paper seems to be sucked right into the paper. The markers I used didn't bleed through, it just felt as if the paper provided enough drag on the marker that it had more time to suck out more ink. It's not a pleasant feeling to me, so I won't use it for markers, but you might like it for them.

I used a variety of [Pentel] brush pens for [my tests in Friday's post]. Mostly I was working with the fugitive, dye-based ones, sometimes with watersoluble ones [but using them without water]. I was also experimenting with the fine-tipped brush pens they make instead of relying on my Pentel Pocket Brush Pen. That pen remains my favorite, but I like to try the others. (I've started noting down which pen I used when I do these quick sketches because I found afterwards it was difficult for me to tell some of them apart, though the different inks have a slightly different color cast when viewed in person.) If you would like to see the variety of Pentel Pens I use please see my post about them here.

In today's image you can see some thin lines and those were what I began the sketch with—they were made with a size 10 Pilot Lettering Pen.

I just purchased a couple of these (different sizes) from Jet Pens. I had not seen them before and they popped up in one of their mailings.

Years ago Staedtler Pigment Liners were not only available in the "technical pen" tip that you see everywhere today, but you could also purchase them in a 1, 2, or 3 size calligraphy tip. The 1 was the finest point and I used it for EVERYTHING for years in my journals because it was fine enough to get great details, but because it had the chisel tip of a calligraphy pen it also could do amazing things if I tilted the pen at odd moments. And of course they contained the same wonderful, quick drying, non-odor, water-proof ink of their Liners that I needed for my sketching and painting.

I was devastated when they ceased to be available. I spent a year tracking them down. I got "our distributor doesn't carry them any more," "we can't get them," comments from U.S. vendors. A friend found a handful in Hong Kong and brought them to me. I made them last, using them for special trips.

Wet Paint even told me that when they had them they were the most popular of ALL their felt-tipped calligraphy pens. It seems strange to me that a company would stop making something there is so much demand for, but as several of us learned with the Gocco fiasco, if something, no matter how popular, isn't part of a company's main focus or represents only a small portion of its revenue (even if that revenue is enough to fuel an entire separate company) then it will probably fade away.

I contented myself with other pens and soon found myself working larger and then found that if I was going to work larger the Faber-Castell Pitt Artist's Calligraphy pen could be a valuable tool. I put the matter out of my mind.

…Until a month or two ago when Jet Pens sent me an email and there was a photo of some stridently neon green pens from Pilot, called lettering pens.

I ordered a couple different sizes and was thrilled to find them a great pen for sketching and writing. The size 10, which is the smallest, is about the same size as the now-defunct SPL Calligraphy pen I loved. The ink doesn't seem to dry quite as fast. It is pretty water-resistent, though on some papers it bleeds ever so slightly when I go in with watercolor washes. (At this level of almost non-bleeding this is more a sizing issue than an ink issue, and if you don't understand the importance of a paper's sizing on the working characteristics of ink you might want to read, "It's Not Waterproof Until It's Waterproof.")

Additionally the ink didn't smell. So now I'm happily using these pens. I don't know how long one will last, or how the tip will hold up, but frankly we've past the threshold of "fun factor" where I feel I've had my money's worth, so I'll be buying more of them in the future.
I also like the security of knowing that should I ever drop one in a snowbank (which is all we have up here at the moment) or in a field of grass (should spring ever arrive) that the color is odd enough and vibrant enough that I'll be able to find the pen!
In the image I posted today you can see how I started with that pen, and then, when the main portions and details of the drawing were complete I went in for the dark masses with the thickest Pentel Colorbrush, which uses non-lightfast, dye-based ink, but has a huge fun factor.
I think if I had not changed pens I might have used the Pilot Lettering Pen up on this sketch, because as I wrote in my earlier review of Wave paper, the paper seems to drag enough to give the impression that more ink is being sucked out of the pen. I much prefer working on really slick papers, however, with this paper there is a lovely tooth that allows you to get some interesting textures out of the brush pen.
I know I'll continue to use Wave paper when I want this sort of effect. But I think that most of the time it will remain a paper mostly useful for doing quick sketches at life drawing.
As to the paper's ability to accept light washes—I've still not experimented with that. We'll see.
drawingdrawing paperdrawing paper reviewdye-based inkKunst & PapierpaperPentel Bold Point Brush PenPilot Lettering Penreview of Kunst & Papier Wave PapersketchingStaedtler Pigment LinersWave paper 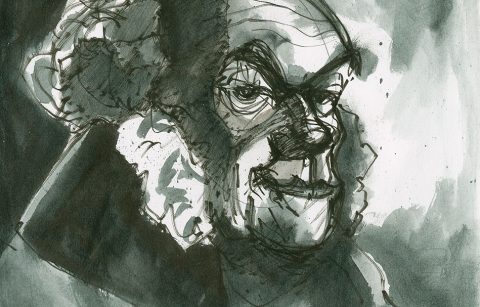 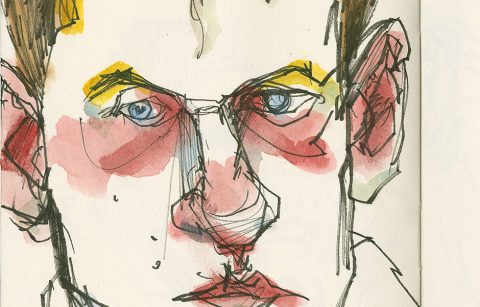 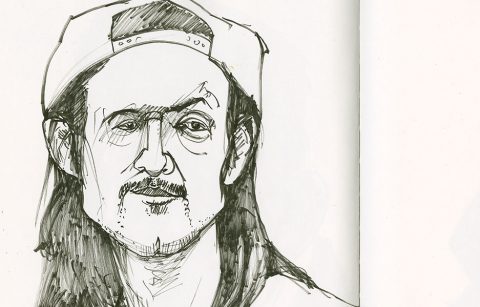