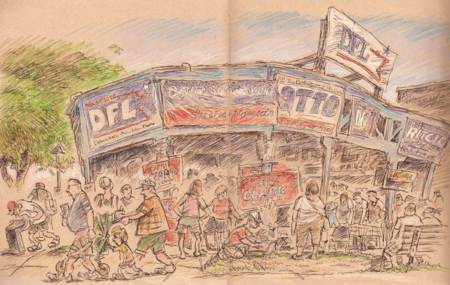 See the full post for details and lots of links to past posts on Ken Avidor.

Above: One of Ken Avidor's Minnesota State Fair Sketches. Click on image to view an enlargement. (Image ©Ken Avidor)

Fantastic news for sketchers: artist Ken Avidor is going to be writing a bi-weekly column about sketching in the Twin Cities which will post at streets.mn (that link will get you to his first column which is about Urban Sketching and urban sketching).

"The column is kind of an outlet for me to discuss the sort of non-arty things that occur to me while sketching," Ken said, when I asked him if was going to be a regular feature (and yes, to repeat, it will appear every other week).

Coming up he'll write about perceptions.

I've known Ken for years and besides the fact that he's constantly putting himself out in the world creating new encounters and amassing new stories, he also already has a lot of fabulous, hilarious, and often serious stories about the art-full life and the well-observed life. And he's chockful of opinions.

I hope you'll go over to streets.mn and start checking out his column.

And…Creating a New Category: Some Background on Ken

In writing the post I realized that it was about time Ken had his own category on my blog because I do tend to write about him a lot (partly because he's so interesting and partly because he graciously allows himself to be roped into some of my plans). So if you go over to the category list in the left column of this blog you'll find "Ken Avidor." Earlier posts won't be keyed to this category, but below are some of the ones I recall off the top of my head. (If you use the blog's search engine you'll find more.)

A video of Ken sketching in 93 degree weather at the Minnesota Fair in 2013.

I think Ken was the first artist I profiled on my blog when I started it in October 2008. Here's the profile I wrote of Ken Avidor in 2008.

At the MCBA Visual Journal Collective's Second Portrait Party we didn't make a book of portraits but drew in our journals, after Ken said a few words about sketching portraits. (We went back to making portrait books at the third through sixth portrait parties.)

When Ken is in town and we have a portrait party where we make a book he plays a pivotal role creating pages to make the page spreads fall correctly.

And Ken made this fun, short video about my passion for Spin Art at the Minnesota State Fair.

That's just some of it. He should have had his own category long ago. 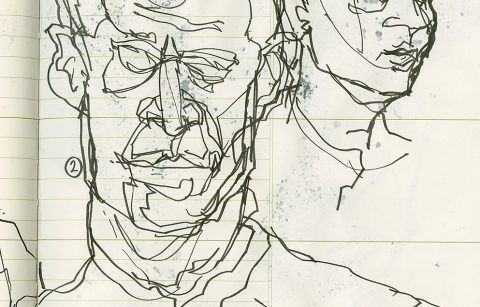