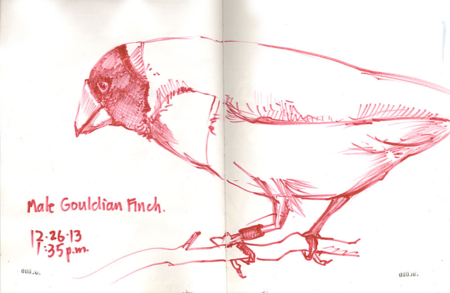 I have some sad news. Around the middle of December I noticed that I'd walk by the aviary in the nursing home and I couldn't see the female Gouldian Finch. I regret not saying something right away; perhaps things would have been different. I didn't see her peeking out of any of the little covered nesting baskets. The male, always a bit skittish, seemed more so. This went on for three days. I thought she'd been removed and he was responding to being alone (without his partner, there are several other pairs).

Then I came in one day to see my favorite bird dead on the floor of the large aviary. (I did sketches and may make a finished painting, but it's rather a personal image right now.)

I let management know because I wasn't sure when someone would notice. I was told they'd take care of it at the end of the day. The male disappeared after I made this sketch. I don't know if he also became ill and died or he was just removed.

I miss the female very much.

I remember the day she arrived with her partner.

The little doves had been removed. Of course they had been my favorite and I was at first a bit disappointed to lose them, and startled by the bold blobs of color the Gouldians brought.

Even in the beginning she would come to the end of the branch nearest the window and peer right back at me, fearless and inquisitive, calm and intense. She had large beautiful eyes with which she held my gaze. She was patient. Her feather colors were a muted match to the saturated flash of her mate. I preferred, as usual, the more neutralized approach.

She got me through countless stressful days. I was quite smitten. 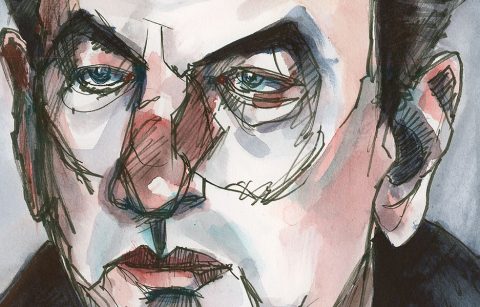