Above: Yep, an actual pair of sweat pants worn by me on an obviously regular basis. Read below for more details.

Recently I hired an assistant to help me sort through papers and books from the folks'. It didn't work out. Our organizational styles didn't mesh. I'm on my own once again.

Roz stands at the stove making fried rice. She turns to Dick. Smirking.

D: No you can't. You're very Truman Capote-esque.

(Years ago we'd both seen a taped interview during which TC laughed at the notion that people he'd been at parties with were surprised when he wrote about them.)

Well there you have it—one failed experiment in having an assistant. (Also I don't really like having someone in the house when I'm working, except for Dick of course, but he has his own study upstairs.)

Since I can't write about the failed experiment (and there are some wonderfully silly moments) I am writing today about failed sweatpants, failed fabric—the best sweatpants I have ever had.

In the image shown in this post you'll see one of four pairs of 20-year-old, 100 percent cotton sweatpants from Title Nine. They have to be 20 years old because I wore them when Emma was still alive and she died in 1996.

These are one of my heavyweight pairs. I also had two pairs of lightweight sweatpants that were the weight of a heavy t-shirt and perfect for hiking through the humid forests in August, tracking with the girls.

Until recently there were only a couple holes in the front of the legs: wear, and of course extra wear caused by breaking through fields of thistle and walking through briar patches. (My dogs really didn't care.)

These pants have been worn more times than I could count, and washed more times…But they have lasted all these years, failing only in the past two months or so, because they were a quality garment and I always dried them on a drying rack. (Please Title Nine, start making these again—not everyone wants to wear skintight sweats with lycra.)

As you can see, when they first started to fail, inspired by a friend who does colorful embroidery on her clothing, I stitched up the holes. But over the past month, the holes have become more or less a feature.

Last week, while watching a particularly thrilling TV mystery, I found myself absentmindedly enlarging the holes, a sort of tension release. I'd already decided that this pair was scheduled for the bin when I took them off that night.

Don't worry, I don't go outside wearing any of these pants. Not since Dot died in 2003. And then they weren't full of holes.

It may be many years since I lived in my father's house, but I believe his radar still picks up when I go outside without silk or linen on. Some things never fail. 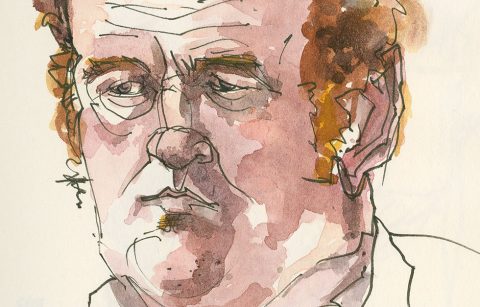