A Trick of Memory 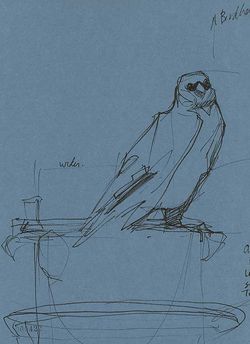 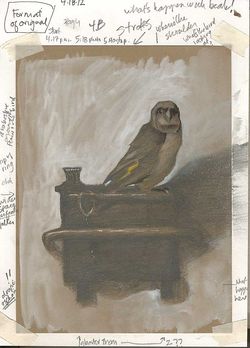 Left: First trial at completing a memory drawing of Frabritius' Goldfinch. Gouache, pencil, and pen. Read below for more details.

Early in 2012 I took a Memory Drawing class at the Atelier in Minneapolis. The class was taught by Stephan Orsak. He's since taught it at least one more time, and a friend who took it with me and again said each time was different—different exercises and approaches. I think Orsak is an excellent teacher and recommend you take it in whatever manifestation it is offered if you can.

The class worked through several memory exercises from tying visuals to oral tradition, through memorizing angles and then finding them in what we were drawing, to memorizing shapes and drawing them in real size with only a point or two to jog our memory.

Frankly I can't, in a short (or even longish) post tell you enough about the experience to give you a complete understanding. Sometimes we would be asked to look down a hall for 3 seconds and then draw what we saw without another peek. Other times we would play games with patterns.

There was homework every night (we had to memorize all those shapes, remember? And practice drawing them). We were encouraged to notice something during the day and draw it later at night from memory. Of course all of that was beyond my comfort zone as I only want to draw what is right in front of me. And I'm distrustful of memory in many respects. But I'd signed up for the class and I was going to work at it.

About 10 weeks into the 15-week class Stephan announced that our final project would be to pick a favorite painting, apply any (or all) of the memory techniques we'd learned, and paint the painting in our final class, without looking at the original (or print reference, because everyone picked master paintings or drawings).

Above, the first image in today's post is my first in-class practice attempt after one week of memorization. I chose The Goldfinch, by Carel Fabritius. It is my favorite painting, not just because it is a bird painting, but because the textures and strokes used are so magnificent, quick, spare, and magical. The link in this paragraph will take you too Fabritius' painting so you can compare it to my own couch potato version in this first attempt.

Even though my first attempt widely missed the mark, I wanted to show you the steps in this process as an example of how my mind was attacking the project.

First we were told to use the same format as the original, though we could change the scale. I was already in trouble, starting too large on the piece of paper I'd brought (Stonehenge Kraft) leaving myself no place to go. (I began working pretty much actual size.)

Left: A quick memory drawing sketch one evening before the final.

You'll also see in the top white margin some time notes. I decided that I wouldn't go and look at my reference images in the other room (where we all had to leave them). I started at 4:17 p.m. after an close look at my reference materials. At 5:18 I took a photo of my progress. At 5:40 I stopped at the point you see.

My idea of using the tan paper, didn't work as I'd planned. In my haste to keep working I lost all sense of color memory, and ability to apply white gouache.

To step back for a moment I will explain that for reference I had a large poster provided by a friend in publishing who had once put this image on a book cover. And I had a printout from the internet that showed the full background, uncropped. 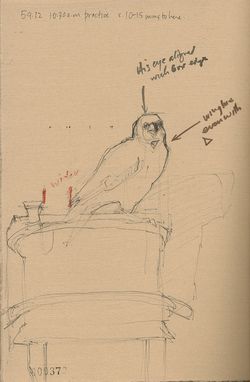 Left: Another homework session as we neared the final project.

During the weeks of study I put acetate overlays on both reference pieces and wrote notes to myself. Sometimes those notes were about color or shape, other times the notes were about relationships. I based my memory map on relationships. So this eye height lines up with that, and that portion of the body lines up with that (whatever "that" was, I was very specific!). I also based my study on comparisons, this is to that, and so many of this equals one of those. That sort of thing.

In the first image (at the top of this post) you can see that even as I go gamely forward I'm uncomfortable (because I can't see the thing) and note "!!drape of chain" as a reminder to recheck it and bring it to the front of future study. Or I note "Where's the shoulder?"

Elsewhere there's are comments from Stephan reminding me to consider, "What's the bird looking at?" (to jog my memory so I'd correct it) and to focus on "the arabesque around the fenial [sic] and the bird." (That's my writo, I was working very quickly.) 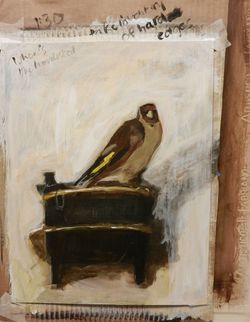 Left: The second in-class dry run before the final. This is on a piece of toned 300 lb. watercolor paper. (We were allowed to prep our canvas, because most students were working in oils.)

I roughed everything in with a 4B pencil, darkened some bits with ink, smeared gouache in the background and on the wing. I made notes to myself, as in the bottom right to note and remember "What happened here." That means I had the sinking suspicion I was leaving something out that happened on the wall there.

Because there isn't a lot of color in the image I selected, and because I basically love line, I'd say that my approach focused on the lines and shapes. In the evenings before looking at my reference materials I'd make a quick sketch, going over my memory map of steps and relationships, quickly with just a pen as you see in the second, blue paper, image. By this time you can see that the angle of the bird's head is something I'm focusing on remembering, as well as the space behind him, and the negative space at his base.

I don't know how many times I sketched this image, sometimes two times a day. Sometimes I would study my reference materials a couple times a day, but not sketch.

Left: My quick statement and no details postage-stamp sized thumnail made in 30 seconds. We were asked to do these before we started our final in-class memory painting. Click on the image to view an enlargment.

We had another in-class attempt, which you can see in the fourth image in this post. I was working with acrylics because I thought this would give me the best chance to get something similar to the oil surface and yet be able to rework easily. I worked directly with a brush, blocking in the shapes and then started to work around the piece adding details that I could remember. The comments at the top of the page were nudges by Stephan for future study: "Where's the hardest ed[ge]? Take inventory of the hard edges." I stopped after 90 minutes (1:30), and didn't refer to my reference material since I wanted to practice for the "final." 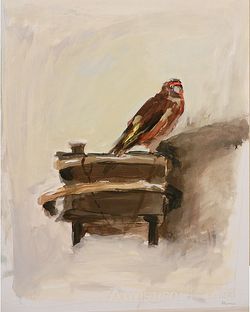 Left: The final in-class painting. Because I had such a harried beginning I did run back to the kitchen to focus my attention again once during this. I don't have my glasses so there's no ability to see fine details and he looks rather rumpled. Allowing for the color being way off, except for his shoulder/back edge being a bit high, thus making his head too small, if you squint down really hard he's not awful. I had an hour into this, since I used valuable time searching for my glasses.

On the day of the final project I discovered I had left my glasses at home. (I'd driven over with sunglasses; I even ran down to check the car.) After a frustrating search I dove in and pushed the paint around.

You can see my in-class final in images five and six. 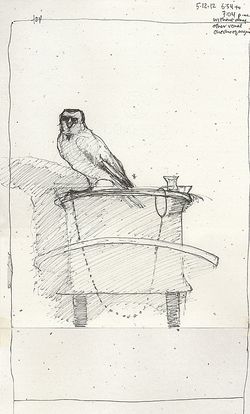 Left: A few days after class ended I actually missed drawing the bird every day. I had not looked at my reference since the final "exam." In class we'd joked about doing flipped versions of the image and one evening I picked up a piece of paper and did this quick sketch.

It was a fun project; one I learned much from.

I was amazed at how the details of this painting stayed with me for a long time.

In the final image, where I drew the mirror image of the painting without first looking at the painting since the final project, I can see how I mentally marched through my various check points which included the angle of the head, placement of the shoulder, negative space at his feet, distance to finial, angle and space to shadow, drape of the chain. I elongated the stand he's sitting on, but then I have a tendency to elongate things—even when they are right before me.

Even now it's difficult to resist the urge to pick up a pen and see what I remember. But I've just been looking at the painting, so I'll have to leave it alone for awhile longer.

This process showed me what I need to work on in seeing and retaining value and color and shape in my mind long enough so I can put it on paper—whether it's 30 seconds after viewing or 6 hours. I still do my daily memory sketches—but not every day. I still prefer to draw from life. But I do feel these types of exercises have helped me retain information when I'm drawing in the moment—fleeting information such as a bird flying by—what angle was this in relation to that? My mind responds and puts the answer on the paper.

I think we all need to get out of our comfort zone now and then, and have a stretch, and a bit of a push. We return to our drawing practice with improved skills and a new roadmap for where we want to go. 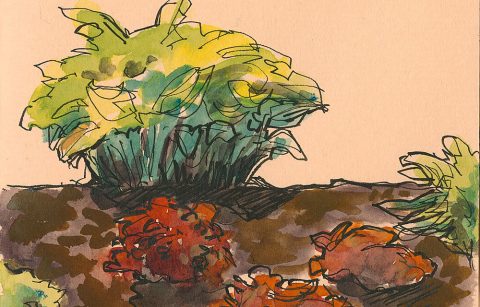 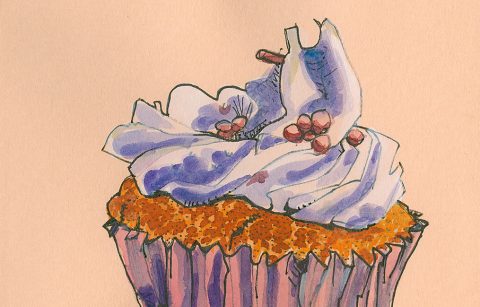