Faces Part 2 of Too Many to Count 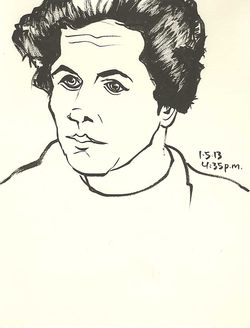 Left: Quick Pentel Pocket Brush Pen Sketch of a TV actress (I stopped the TV) on cream Stonehenge, 8.5 x 11 inches. I started the eyes up too high, but the placement of her face actually grew on me and I decided I didn't want to draw in the rest of her body.

I think I might not be able to go a day without picking up the Pentel Pocket Brush Pen. Today I'm sharing a couple more faces I sketched earlier this year (when I was practicing for the Portrait Party). The first was done with the PPBP.

I like the way you can make such an intense line with the PPBP. And how that line can be thin or thick, and change direction at an impulse or whim.

All those characteristics help me train to edit, edit, edit—what is important as the bare essentials to show a likeness. 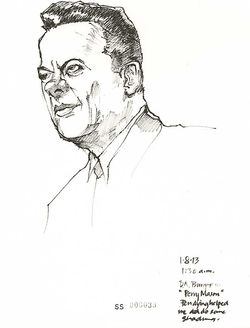 Sometimes I feel like making a different sort of line and in the "Hamilton Burger" sketch you can see me playing around with the Faber-Castell Pitt Artist's Calligraphy Pen. I've written about this a lot so you all know it's also a favorite pen. It's great for working large when a finer tipped pen would take forever. And I can put it on one of its edges and get some fine lines out of it. On the "rough-ish" Richeson Recycled watercolor paper the texture also breaks up the line in interesting ways.

A Note on Perry Mason: These sketches were from the last season of the show, and now earlier episodes including season one are being aired. I find it really interesting to see how Perry's character has changed (sometimes in the early episodes he does things that are "borderline" which he would never do later). Watching how his relationship with Burger and Lt. Tragg changes is also fun. But most of all it's fun to see the different hairstyles and camera angles that are used in the show. The first year is a little less dramatic in its use of camera angles. I think also poor quality video tapes are being aired and the lighting isn't that great. I have a sense they are finding their way. I'm looking forward to working my way back through the series to season 8 (I've seen most of season 9). It's good to have a hobby. 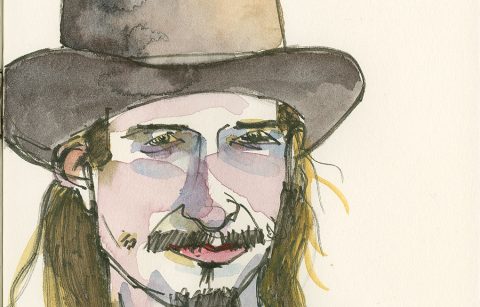