Masterpiece’s “Great Expectations” and “The Mystery of Edwin Drood” 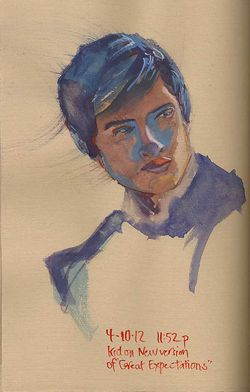 Left: Failed sketch of an actor in the new PBS version of "Great Expectations." (Pencil and gouache on Nideggen.)

Not every sketch works, just like not every dramatization of a literary masterpiece works.

Here I was trying to do something with the blues and the shadows. The great thing about this is that I can immediately go on to the next sketch.

When you don't get it right in a dramatization the audience has to suffer through or leave the room!

Recently, like probably millions of others I tuned in to watch "Great Expectations" on PBS.

The first week I thought I was going to pass out from joy. They started with a one hour episode covering Pip's childhood up to the meeting with Miss Havisham.

(Look if you don't know what I'm talking about READ A BOOK!)

Here's something that EVERY casting agent on the planet should have tattooed on to his or her forearm (for easy reading when they have a moment of hesitation and doubt):

There are two roles in Western Literature that cannot survive half-hearted, mediocre, or mis-directed acting: Pip (from GE) and Ralph (from Lord of the Flies).

Seriously, you don't know what I'm writing about? READ A BOOK.

Supporting actors of excellence can pretty much fill holes in anything else. They can act around poor casting choices in most other roles, but not these two essential creatures. If you don't have the right Pip (or the right Ralph) nothing else works. NOTHING. Because we couldn't careless.

Imagine then my complete dismay when young Pip morphed into "older Pip" and I realized I'd have to spend 2 more hours with "older Pip."

Don't get me wrong—Douglas Booth is probably a fine actor (this is the first time I've seen him). Give him a hearty breakfast of oatmeal and pinch him and he'd make an excellent Steerforth. (Seriously? David Cooperfield.)

But he is not Pip. Nope, no way. And the entire production sags because of this essential fact. Part of this is a fault of the screenwriting—what to leave in, what to leave out when you have the vast amount of detail Dickens provides. Those choices do limit the actors. But Booth just doesn't make me care. Neither, for that matter does Vanessa Kirby as Estella. I kept wondering about her wardrobe and how it didn't seem to fit her.

If you haven't watched this version of GE go ahead and watch the first hour, because Ray Winstone gives an utterly raw performance of Magwitch that will grab you by the throat. And Shaun Dooley is very fine as Joe. Harry Lloyd does a lovely bit as Herbert Pocket in the 2-hour finale but then you have to live minute to minute waiting for his character, or Joe, or Magwitch to appear. (Strangely Lloyd was "Young Steerforth" in an adaptation of David Copperfield with Maggie Smith that I have not seen—I'll look for that, as well as other productions including him.) I'm still absorbing Gillian Anderson's performance as Miss Havisham.

When it came time to view "The Mystery of Edwin Drood," my expectations weren't great. I have trouble with how most writers "finish" the unfinished work. And we have so little of the book it's hard to like many of the characters yet.

Dickens kept notebooks on his novels and when you compare the notebooks to the number of pages generated of finished work there is consistency that allows us to extrapolate how long Drood would have been. It's been a long time since I read studies about this but I seem to recall that we barely have a quarter of what probably would have been written.

My problem with this production of "Drood" was the "cramped" nature. The approach the screenwriter took was plausible enough (within Dickensian plausibility) but it needed plumping. It has been so long since I've read this book that I would have to reread it to know if I'm liking adaptation or sheer innovation, but Rory Kinnear does a lovely bit as Reverend Septimus Crisparkle (nothing about it seems familiar—hence my need to re-read the book). Basically Ron Cook walks away with the whole thing as Durdles. Since that's a minor role, again we have the issue of the main actors not making me care about them.

With movies of great books (that are complete) we often go to the performance and superimpose our impressions and memories of the book onto the adaptation. The adaptation should stand alone. Since we don't have anything from Dickens after the early stages to impose on the story of Drood, however, it seems a little truncated (the issue of cramping Dickens into a small space) and it also seems a little hollow.

There are plenty of bad adaptations out there in which the actors make me care about their characters even though the writing is poor.

So here's hoping casting agents get a clue. 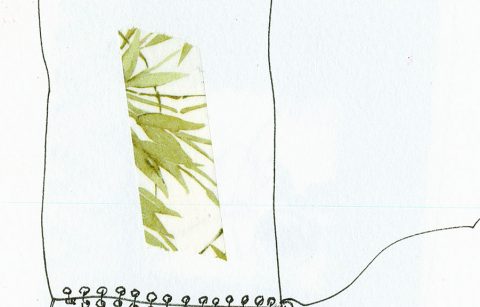