Dogs on My Mind 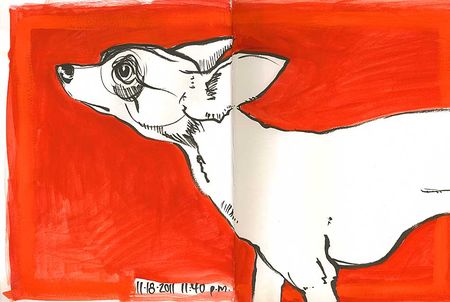 Above: Pentel Pocket Brush Pen sketch of a dog park dog. With gouache on the background. 9 x 12 inch in-studio Fabriano Venezia journal. (Yes I came in on the edge of the left page in the spread but not on the right edge, and yes there is a lighter orange band around everything. I've been using a Bristlon filbert for these quick, late night forays into smooshing paint around, and it is really too hard on the papers I normally paint on. That brush is great for watercolor canvas board!)

EEEEK. I just realized something about running two concurrrent journals (which I typically don't do but have been doing for the past couple of months because I like having the larger in-studio journal to work in), I've got two journals to wrap up by the end of the year.

Since I just recently started a new carry along journal that is nice and fat (because I was going to have an out of town visitor and figured I'd burn through lots of pages, but that visit didn't happen after all) I now have a multitude of pages to fill in the next 29 days. (I had better get my butt to the zoo!)

I've written before about letting go of the need to end up on December 31 and start the new journal on January 1, but yesterday, while looking for a master plan for a book structure in one of my journals I found some wonderful pages about Dickens (it's the bicentennial of his birth next year—more on this later) and have resurrected some old plans I never followed through on. The point is that was a January 2002 book and that's the last time I didn't start a new journal on January 1. EEEP.

You know what. I've just got too much to do right now and I need to go and have a couple pieces of chocolate.

Yes, take this as a self-portrait, because it really looks nothing like the dog park dog I modeled it on.

Note 2: I've got 31 spreads in the in-studio journal and 25 spreads in the carry along journal (which is only 6 x 8 inches large so even on a full page spread if I use the Pentel Pocket Brush Pen and work pretty large I can get through them as one image). Fifty six page spreads. I don't have my calculator handy but that's only about two spreads a day and typically I average three a day, so I should be fine. Now it's going to be all about pacing, so that I don't end up early with no journal pages! Sigh.

I really do need that chocolate. This is what happens when the weather changes and we start getting snow. One really needs to have an Alaskan Malamute to be reminded of the joys of snow. 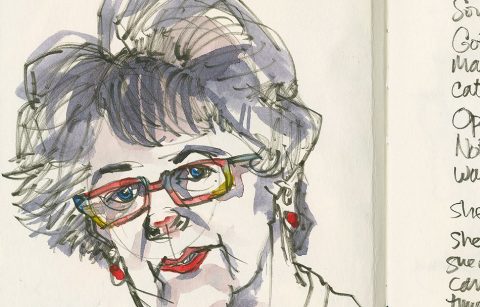