A Facsimile of My 2011 Minnesota State Fair Journal 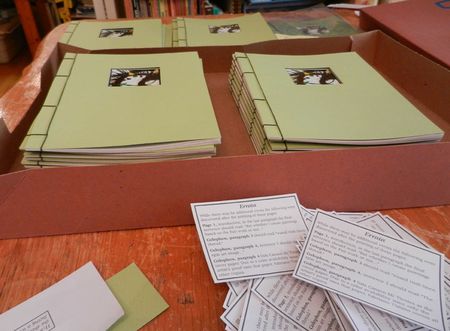 Above: the completed editon (30 plus a prototype) of my 2011 Minnesota State Fair Journal Fascimile. Read about it below.

For the recent MCBA Visual Journal Collective's Box of Journal Bits Exchange I made a short facsimile of my 2011 Minnesota State Fair Journal (18 pages, not the 90 or so in the full journal). You can see the completed edition above, as well as the errata slips which were attached to the inside back cover before it left the studio. (I discovered a couple errors after the printing and first sewing were completed!) 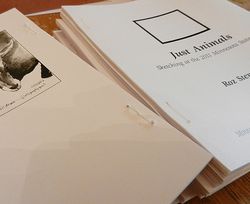 I created the book in Quark Xpress and had it output at FedExOffice (I don't currently have a toner printer that will do the size sheet I wanted to do). I had to trim the sheets, but I was able to do that quickly at MCBA on their guillotine cutter. (If you are a member at MCBA you can rent their equipment at a very modest rate. I only spent $9 on this aspect of the project.) 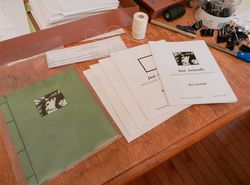 Right: A closer view of the prototype (left, which had a darker green cover than the final edition of 30 books) and the stack of books not yet covered (right). You can also see the hand tipped in archival print of Spin Art that I used on the title page, and which is visible through the cover window (as seen on the prototype). I used unwaxed linen thread for the inner stitches (see the white spool) and for the outer decorative stitch I used a 4-ply dark green waxed Irish linen thread. You can also see the templates for sewing the cover stitching. They are sitting right at the head of the books on the table. I use a bulldog clip at the head and at the tail of the book when sewing either stitching, to keep the template and the pages all in place.

Left: This image just gives a closer view of the print I inserted on the cover, and the window feature, both on the prototype (right, without a print) and the first book of the edition (left, with a print). Both are shown before the final cover stitching.

The book has an inner sewing which isn't visible in the final product (see the second image of this post for a view of it), but is crucial for holding things together and making a tidy book. I was running out of time and thought about using two staples, but they would have shown through the cover. Instead I just hunkered down and stitched in every spare moment. I found that drilling all the holes with an electric drill saved me a lot of time, over hand punching.

This was a great exchange project and if you would like to see what other people made for the exchange or read more about it (and see two short videos) please see my post from Friday, The MCBA Visual Journal Collective's Box of Journal Bits Exchange.

We have more exchange projects that are in the works for 2012 so watch for them. You don't always have to be on site to participate.

Our next group project does require on-site attendance. It is of course our annual portrait party on January 16, 2012 (the third Monday of the month) from 7 to 9 p.m. You show up, sketch a partner, she/he sketches you, I paste it all up into pages, we photocopy the pages, fold, collate, punch, and sew a photocopier edition, with everyone going home with a book. ($5 covers the paper and toner costs.) So if you want a fun and crazy time, and a book to show for it afterwards I suggest you show up!

I realized, when preparing this post that I've yet to post a video flip through of my complete 2011 Minnesota State Fair Journal. I'll try to get that video shot in the next couple weeks.