Roz Has Her Own Live Action Figure 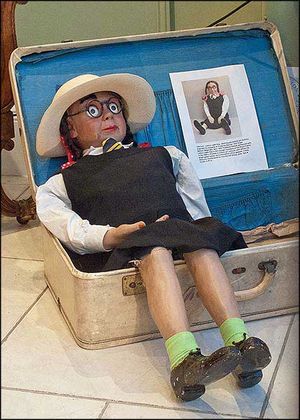 Left: Life is just too rich right now! Read below for details.

My friend Tom was in London and passed an antiques store. There it was, my very own Live Action Figure!

OK, I didn't wear glasses when I was younger, and our uniform had brown socks and a navy blue tunic, but that's me!

Walking past an antique shop in London, I came upon this ventriloquist's dummy in the window. I thought immediately of you. The card says, "Lettice Leefe Hop, ventriloquist school girl dummy, originally the property of Frederick Barlow "The Great Barlow" (Magician), born 1903. Frederick Barlow performed with Letice Leefe Hop to the younger members of the Royal Family in the 1950s. Dressed in school girl uniform, with school tie, bright green socks, and tortoiseshell effect glasses. Inside, there are mechanisms for moving  eye brows, eyes, lips and mouth. Height: 42 inches."

Clarification: Judging from the comments I've clearly caused confusion. While the post title says "has" I do not have this doll. It remains where Tom found it. I was using "has" in what appears to be a rather archaic and personally idiosyncratic way, to indicate the exisitence of, and availability of something in relation to a character, especially in this case a fictional character, as in: "Opus has plush toys of himself available," or "Han Solo has action figures" [available understood]. In other words I was trying to pimp myself by indicating that I was in fact a fictional character. So I apologize for the confusion. But it is the goal of every fictional character to have either an action figure or plush toy. And friends here have to put up with this sort of stuff all the time.