Sometimes Leaving Something Out Emphasizes It

In Context—More Pep Talks from the Archives

Notice Everything When You Get the Chance…

See the post for links to Marty’s Fair sketches and other great sketches from the Fair by a variety of artists.

You have to go right over to Urban Sketchers—Twin Cities and check out the exquisite pen and ink (with some collaged on type) that Marty Harris posted from the Fair. Marty has been known to make prints of his work and I'm hoping that he turns this image into a print, because I want it on my wall!

I didn't attempt to sketch Reggie—I went to see him, wrote down his specs and then made a note in my journal that there was no point sketching him because without something next to him for scale no one would know that one of his testicles is bigger than my head. Marty has captured every one of Reggie's 1,450 lbs.! (Reggie is a 5-and-1/2-year-old crossbreed pig on display at this year's Minnesota State Fair as the largest boar. The largest boar gets a huge pen all to himself in the Swine Barn, near the information desk. Where, by the way, you can also get some paper pig ears to wear—now aren't you sorry you didn't go?)

You can see more of Marty's stunning pen and ink work at his Flickr group for Minnesota State Fair Art. Marty works a lot with a Pilot Better Retractable—medium and fine—I know because last year at the Fair when I ran into him he gave me one. Of course the delicious line he achieves is not standard issue with the pen, but you might find this inexpensive office pen a good choice for your work, adaptable to your style, and something you don't mind dropping in the cow barn! 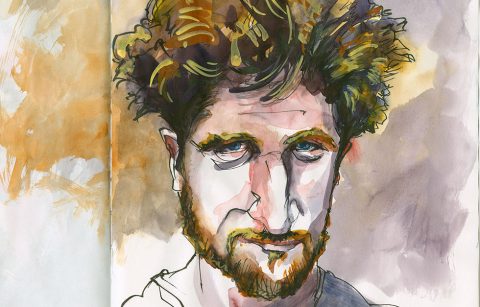