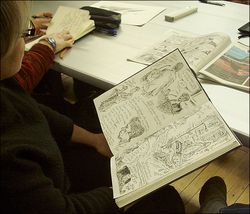 Left: Carol pages through Ken Avidor’s Tom Petters trial journal. On the table is an issue of City Pages open to one of his illustrated trial updates. Artwork ©2009 Ken Avidor.

Monday at the MCBA Visual Journal Collective illustrator Ken Avidor spoke about forensic courtroom sketching and his work documenting the Tom Petters Trial last fall in St. Paul. For non-Twin Citians and people not keeping up with financial scandals, Petters was convicted of a multi-billion dollar Ponzi scheme. A politically active citizen, Avidor began preparing for the trial in advance by arranging for press credentials from City Pages. (His work appeared in that weekly paper throughout the trial.)

He also researched the main “actors” in this drama and practiced sketching them before the trial so that he could render quick likenesses in the courtroom. (Cameras were not allowed in the courtroom. This makes the role of a talented sketch artist important to capture what is mandated to be a "public trial.")

Avidor explained how he would start with a few guidelines in pencil, then add ink, and finish with colored pencil for his larger stand alone sketches which were used on television to document the trial. 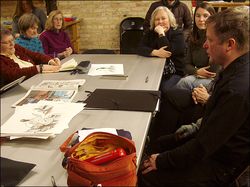 Left: Ken Avidor talking to the front row (the rest of the gathering is out of the shot to the left of the camera). Some of Avidor's larger drawings are sitting on the table in a stack in front of him.

In order to meet the broadcast deadline Avidor would need to finish 3 or 4 sketches in about 40 minutes.

At other times in the proceedings—Avidor attended each full day of the trial—he would work directly with ink in his trial journal (shown in the opening photo of this post). He works with a Rotring fountain pen. 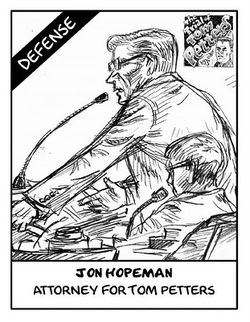 Left: Avidor made artist trading cards with sketches of the key players at the trial. (You can view these at the blogs below.) ©2009 Ken Avidor.

A veteran political blogger Avidor has not one, but two Petter’s related blogs.

Nineteen Collective members had gathered for this talk. The questions ranged from trial details to drawing-related queries. When asked about how he started a drawing and which features he focused on, Avidor explained that he looked for a feeling about his subject and drew that—he looked for the most prominent thing that would capture that feeling.

Following his talk the group broke up into pairs (and one trio) to sketch portraits of each other—looking to capture “that feeling.” We worked for 20 minutes, with 10 minutes allotted for each partner to sketch the other. (I set a timer.) Below are photos of the the pairs with their sketches. I’ve tried to get all the names right, but for some of the first-time or newer members I apologize if I have misidentified you. Please let me know and I’ll correct it. (Apologies to Jean and Roberta, though you appear in some of the photos I didn’t get a photograph of the two of you with your drawings of each other!)

This was the group’s second portrait party. See the first MCBA Visual Journal Collective Portrait Party here. We all had just as much fun this time (judging by the jolly noise level in the room)! I’m sure we’ll be doing future portrait parties.

When I look over the photos below, what I’m most pleased about is how all the participants managed to capture a feeling about their subject! 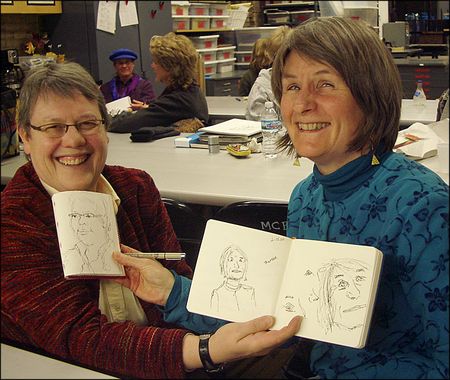 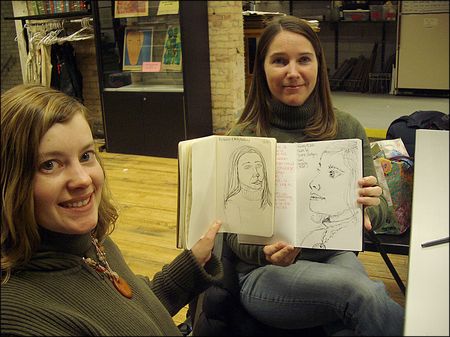 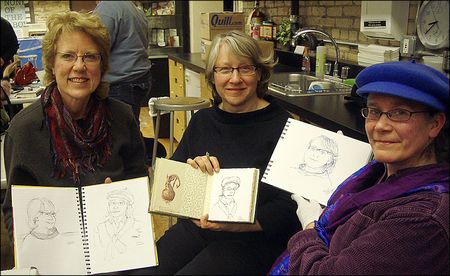 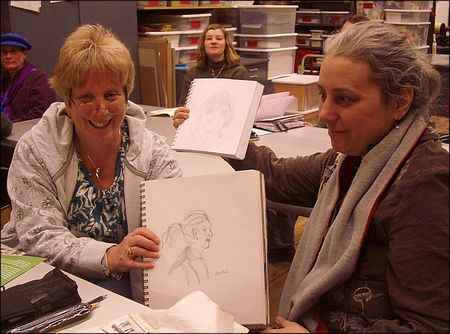 Above: I hope this is Helen (l) and I know this is Anne (r) because the sketch of this first time attendee is so labeled! 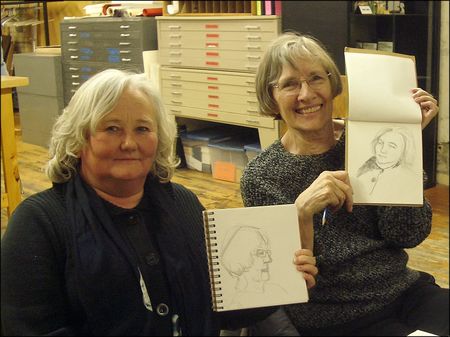 Above: I believe this is Terry (l) and Carolyn (r). 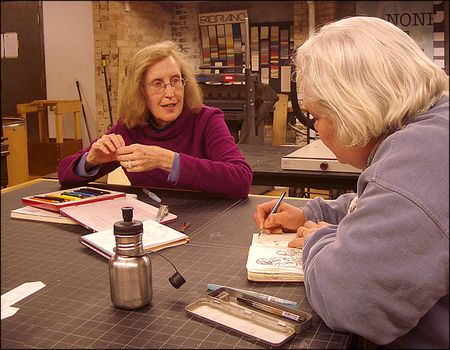 Above: Jean (l) and Roberta (r). (Sadly I didn't get back around the room to catch them with their finished sketches.) 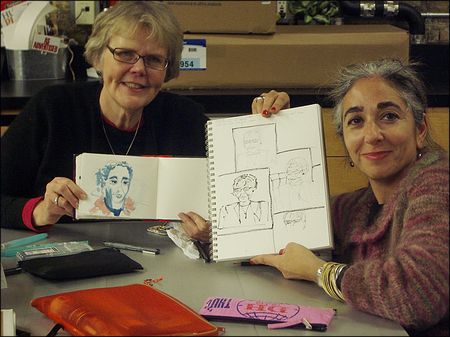 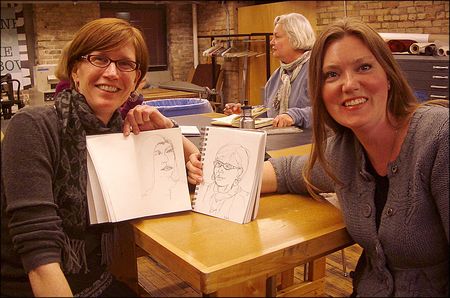 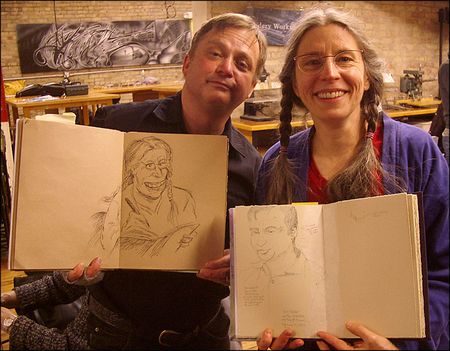 Above: Ken Avidor (l) with me (r). Ken insisted that we both draw at the same time, neither of us being still because we both of us were constantly looking up and down. I've never drawn someone who was drawing me at the same time I was drawing him, so it was an hilarious experience for me and I laughed quite a lot. (I also stopped after the first 10 minutes because I was just fussing!) A couple of moments into the process we worked out a rhythm where one was looking up when the other was looking down. Ken has sketched me a number of times over the years and I have to say this portrait is one of my favorites—definitely catching the likeness of me.

If you haven't hosted a portrait party, now might be just the time to do so. Artist Rama Hughes over at The Portrait Party, inspired our group's portrait parties. He has suggestions on how to go about having a successful party at his site (along with postings of incredible portrait swaps). Get busy and have a portrait party today. You may never sketch at the "trial of the century"—but that doesn't mean you can't capture a likeness today! 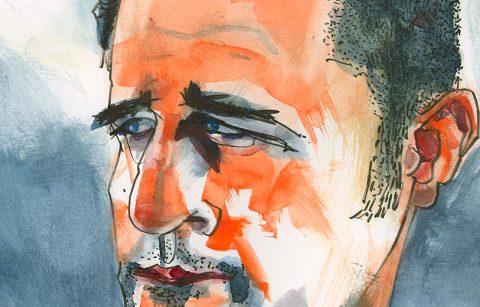