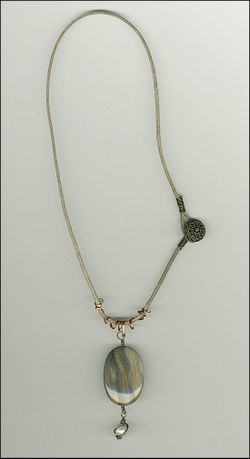 If you would like to see additional necklaces in this recent series click on "Jewelry" in the category list and scroll to the August 29, 2009; September 4, 2009; and September 5, 2009 posts.

Here's another quick necklace you can make with just a few leftover components, a bit of wire, cord, and a button.

I used waxed cotton cord measured to the desired drape length with 2 inches added to allow for turnover and construction of the loops at each end.

On one end I made a loop large enough to slip over the selected button. On the other end I looped the waxed cotton through the button shank. I wrapped 22-gauge wire at the base of each loop and trimmed the excess cord and wire.

Here I used a stone pendant that was sitting around. You could make one. Simply make a wrapped loop, add a stone, end with a wrapped loop at the other end. To that bottom loop add some dangly bits. Here I just added one pearl. It has wrapped loops at each end, but before I ended off I wrapped the wire tail of the wire up and around the top wrap, then back down and around the bottom wrap, and up and around again. The bottom loop was folded flat against the base of the pearl because it would have been too long a pendant if I had added more dangly bits.

The final thing I did was take a piece of 18-gauge half-hard copper jewelry wire and hammer it flat and textured. I made small tight spirals at each end with my round-nose pliers, and then I wrapped the entire length around a pencil, adding a thin paint brush handle next to the pencil when I wrapped the wider loop where the pendant would dangle.

I used the copper wire for the front spiral of wire because I liked the transition of the copper to the coppery tones in the rock pendant. I had already wrapped the cord ends, pendant, and pearl. Some people don't like to mix wire type, but I think if you're making something asymmetrical and eclectic do what interests or intrigues you. If it doesn't work out, save the piece in your leftovers pile!

I threaded the cord through the spiral of wire and then played with the wire, essentially crimping it in place at each end, so that it won't slide to a "conventional" front position and force the button to the back. The button is part of the whole asymmetrical aspect of this design for me. (Note the "crimping" is very gently bent into place by your fingers at each end, because you don't want to distort the cord shape and also ruin the drape of the necklace.)

There you have it: one more simple necklace in no time. Have you tried this yet?

• hang multiple dangles from the bottom of the pendant.

• eliminate all the dangles and make more wire spirals like the copper one and position them at intervals over the cotton cord.

• use more copper wire spirals and keep the dangles, and add even more dangles 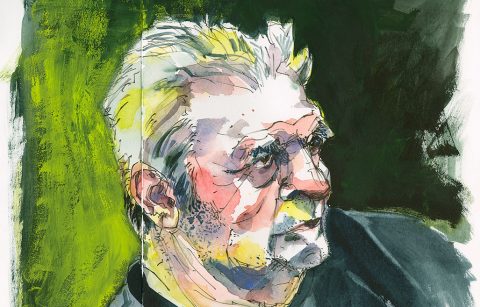 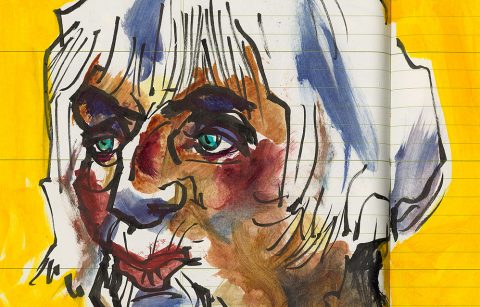 Things To Do in the Current Pandemic: Testing Non-Art Papers for Mixed Media Visual Journaling