I didn't get home in time to finish my next "episode" in eraser carving. But what met me when I got on line was a message from my friend Karen who is a prolific reader and finder of stuff, telling me of the illustrations by Maira Kalman related to the recent presidential inauguration.

Many people will know her work from illustrations in magazines and books. Others might know her from her book Principles of Uncertainty, which is presented as a visual journal.

The past few days I've been thinking a lot about eraser carving and printmaking. This made me think about Barry Moser, considered by many (including me) to be the finest wood engraver alive today. He has a book, Wood Engraving: The Art of Wood Engraving and Relief Engraving. If you are interested in wood engravings or the work of this artist you'll want to get this book.

I loved what he said about learning the medium: 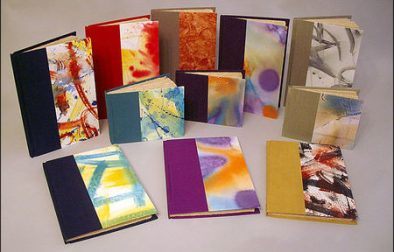 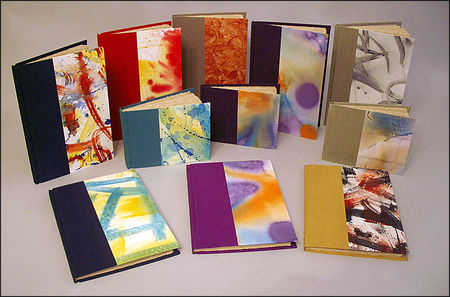 Above: The result of the latest bookbinding binge (or so it seemed), in a sadly lit photo I took for record keeping, but you get the idea. The books all contain Nideggen for text paper. The two books on the left of each row have a lovely navy book cloth. The short book and tall book right of center with swirly purple and orange decorative paper have a dark, rich heather purple bookcloth. The book in the back row center has metalic paste paper. The red book near the left, and the far right book at the back with brush strokes on the decorative paper use Strathmore Aquarius II for the decorative paper. This is the first time I've used that for decorative paper and will be interested to see how it holds up for strength. It's lighter weight (80 lbs. vs. 140 lbs.) sure is an easier paper with which to work. I used almost the last of my Fabriano Uno Soft Press 140 lb. watercolor paper for the decorative paper on the other books. The large books are about 7 x 9 inches and the small ones are 7 x 5.25 inches. They are all 6-signature books, except for the small teal book which holds 12 signatures. (Why 6 signatures? I find that's a nice weight to carry around and a sufficient number of pages to work through in about a month. Then I'm usually ready for a different type of paper.)

A Book Arts Show and Related Programs: Front, Back and Between
Cleaning up after the recent book production frenzy I found my notice from MCBA about the current show. So I have missed telling you about the opening which was January 23, but you have until March 8 to check out "Front, Back & Between" which showcases work from twelve talented members of MCBA's Artist Co-op. The show includes a variety of prints,
artists' books, fine press works and other artistic endeavors. (Please use the link to MCBA to check their hours and to find directions.) 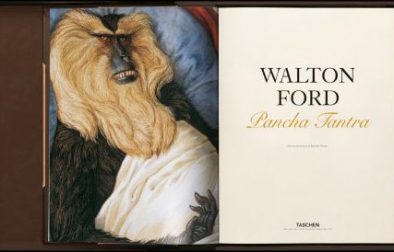 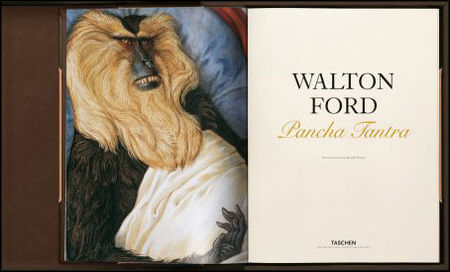 I've been a huge fan of Walton Ford's for years. I first saw one of his paintings in the gallery listing section of The New Yorker Magazine. I had no idea that the watercolors were huge until I read the description. I loved his ability to capture animals and weave a narrative and symbolic thread into his paintings. Someday I hope to see one, actually many, of these paintings in person so I can see them actual size. 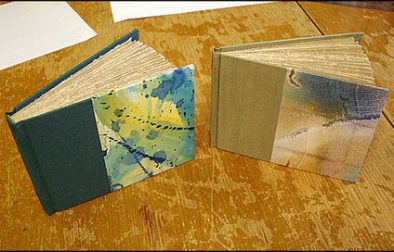 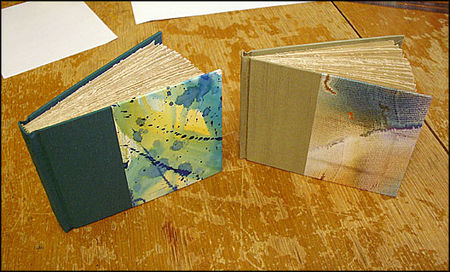 Above: Two 7 x 5.25 inch books made Friday using Nideggen (for text paper) and decorative paper made by me, read more below. Click to see an enlargement.

I love making journals with Nideggen for my text paper because I love drawing on it. (Look at posts from the December 2008. Many of them have images sketched and painted on Nideggen because it was in my last journal of 2008.) However, the paper's tan color is a bit difficult to coordinate with fabric and decorative paper. This fabric makes it look too dull, or Nideggen makes the fabric look too dull, and so on. 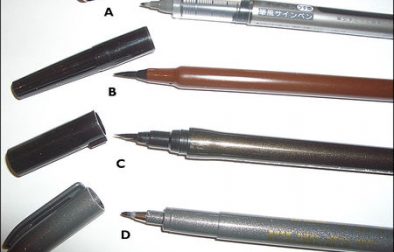 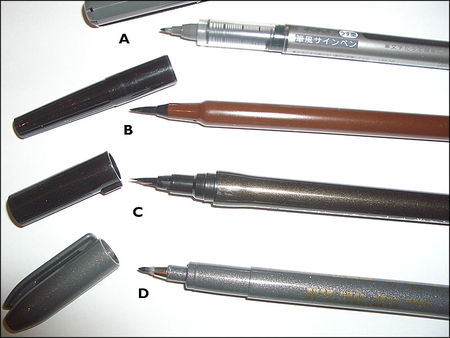 I'm perfectly happy with my Pentel Pocket Brush Pen, but I do like to know what is out there, so recently I ordered a few pens, not available locally, through JetPens. In the photo caption above I have copied the name as it appears on my invoice so that you will have ordering and price information.

While I've been busy catching up on my bookbinding (now that my finger is healed to non-bandage stage) someone has been busy going to visit the Art Shanties I told you about in a Mail Art Call, and there are photos posted at "A Closer Look at Flyover Land." The blog seems to be written […]

I was taking a break and thought I would catch up with my friend Ricë's blog: Notes from the Voodoo Cafe. If you aren't a regular visitor there (and why is that exactly?) you should hop over there right now. Today she has a post called "Journal Spank for Your Saturday: Page Tabs." (Scroll down […] 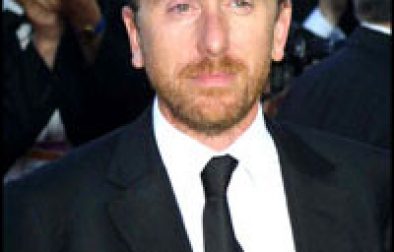 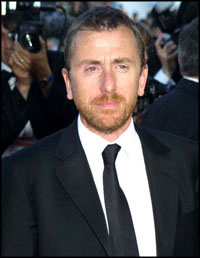 Chocolate, Chocolate (not a typo) Cake 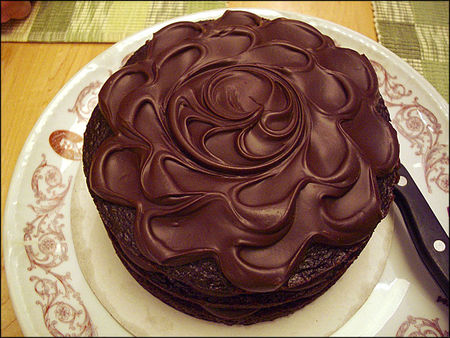 Above: Cake One, Sunday, shared with friends (one of whom was having a birthday the day before mine). This is a "party cake." It is smaller than the normal sized cake, but it's good for about 8 people or so. We at this cake with vanilla Häagan Dazs. Click for an enlargement.

This week I celebrated my birthday several times with several friends. For me there is only one chocolate cake: Cafe Latté's Chocolate, Chocolate Cake. (Yes, Chocolate is repeated.) If you are having a celebration of any sort I recommend this cake. They have other lovely and delicious desserts which my friends eat, but this is all that I will eat there in the dessert way. They also offer excellent soups, salads, and sandwiches (the last are made with their own breads).