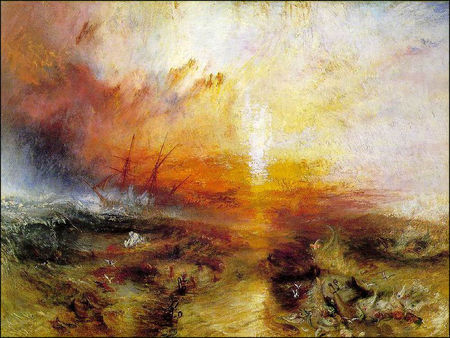 Today "my shoes feel funny" (read on to understand that) and I am going to be running around all day, so I have pulled up a small piece I wrote for my students in February 2007 on my now defunct update list and made some additions. Any time is a good time to think about our own productivity, but I find it particularly helpful to do so when it is cold outside and as a year draws to an end. What are my goals for next year? What is my assessment of this year's goals and my productivity? How can I tweak my process?

Seems he did 1,600 watercolors, almost 600 oil paintings, and over 19,000 colour studies, sketches and unfinished watercolours (let's stick with the British spelling).

If you do the math (and I didn't, I had to hire out for that) it means that he was doing roughly 3 colour studies (including sketches and unfinished watercolours) a day!

It also means that each week he was completing a watercolour (and most of these are pretty large).

On top of this he was completing one oil painting a month (these were also often very, very large, measurable in square feet).

He was doing all this in a time when there was no electricity (so evening-hour work sessions were by candle light if at all). And while he was the most successful painter of his time and earned a lot from his paintings, and would have had domestic help of some sort to do what we consider "mundane" stuff, he was very frugal (some say miserly) and didn't over indulge in that way. (Besides which, today we have electricity and 10,000 devices that are labor saving and two that aren't: Game Boys and TVs; but I'm not going to say anything bad about TV because I watch more than any 3 people! And as for Game Boys, surely science fiction movies have made it clear numerous times that the fate of the earth will ultimately be decided by a youngster who has logged mega hours on some video game because only that child will have SKILLS.)

My point is Turner was really working all the time, from his childhood on. By the time he was 15 he was exhibiting with the big boys and wasn't in the Academy only because there was an entrance age limit of 24 years old. (Note: My reference tells me this. Wikipedia claims he was admitted at 14.)

Through all this he was also a tireless self-promoter who thought, from an early age, consciously about how he wanted his art career to go and made it happen (very Deepak Chopraesque before there was a Deepak).

And he created a fund for starving artists who hadn't done as well as he had; a fund he created with his own savings (not a telethon urging others to give). Perhaps this was survival guilt (he always believed his friend Thomas Girtin, who died in 1802 was the better painter) or plain humility and generosity?

And he traveled all over the place, because of course there were wars going on and tourism was hampered and travel paintings sell. He was getting the job done.

There's a lesson in here somewhere. (Will Roz ever get out of the nineteenth century? At this point it seems doubtful.) In fact many lessons. We can look at this talent and productivity and be totally cowed, or we can see in it inspiration for our own efforts, our own callings, our own passions.

Turner saw life as a Game Boy, and he was determined to have a high score, using everything he was dealt, including his dumpy, frumpy body, and pimply complexion that all his critics are quick to point out. (If you can't attack someone on the essentials of talent, craftsmanship, and intellect I guess they didn't have much else to grasp on to. A 19th century equivalent of tabloid press.)

When my own productivity dips for whatever reason (hangnail, favorite TV show gets cancelled, my shoes feel funny) I like to think of Turner (WWTD: What Would Turner Do?) and just suck it up. Of course sometimes I think of that other Victorian powerhouse of productivity, Dickens. With those two to inspire me it's a wonder I have any energy left to watch "House, M.D."

But when you're thinking about your own path, career, calling, passion, I hope you spend a thought or two on Turner, toiling away, painting a volcanic sky (using fugitive pigments despite the pleadings of his colorist—and that is not a Victorian term for hair stylist), getting the job done. Like the other Romantics he was interested in the process of creativity. He organized his work (all his works including the unfinished pieces and sketches) so that it could be presented as a whole, so that his creative mind could be understood. And because of that we can see the struggle and joy in his work and know he loved the process—just not to the detriment of product. We see balance.

He could have been a raving lunatic as well, but it doesn't matter, because in the orchestration of process with productivity Turner has given us a template of balance we can adapt to our own work. I just hope this balance allows for enough time to catch episodes of "Living with Ed."

Notes:
Simon Schama's Power of Art has an episode devoted to Turner which is vastly interesting. Look for it in reruns on PBS or purchase the entire collection of DVDs at the link I provided. (There is a great episode on Caravaggio too.) Schama talks about Turner's use of laudanum ("an alcoholic tincture of opium") and its effects on his personality and artwork.

In Turner's Footsteps, by David Hill was one of the books I was reading when I first wrote this in February 2007 for my students.

The Tate in Britain has an online collection of Turner's sketchbooks which everyone should look at. You'll get a sense of how great his visual memory was. Often he didn't record much but the barest outline, perhaps interrupted or he had what he needed?

If you can find a copy of the show catalog, Judging by Appearance: Master Drawings from the Collection of Joseph and Deborah Goldyne, you'll find an exquisite painting of a Mackerel from one of Turner's  sketchbooks, made between 1825-1830. It looks wonderful in the book, in person it will make you cry. Now I know what it is to covet.